The stock market suffered a substantial setback on Thursday, priming the Dow, S&P 500, and Nasdaq for a disappointing end to a relatively optimistic month.

Donald Trump’s latest trade war tease failed to prevent the dam from breaking, and the president huffed off to Twitter to rage against the foes that he blames for today’s downturn.

Trump directed his fire at two familiar foils, including the “Do Nothing Democrats” and their “Impeachment Hoax.”

House lawmakers voted today to formalize the Democrat-led impeachment inquiry, and the president identified this development as one major factor “hurting our Stock Market.”

The Impeachment Hoax is hurting our Stock Market. The Do Nothing Democrats don’t care!

It’s still unclear whether investors actually care about the impeachment probe, however, and historical data is too limited to provide much convincing insight. The crux of the matter still hangs on whether the inquiry ends up being fan-service to the Democratic base or enough Republican senators cross the aisle to make removal from office a viable scenario.

Earlier, Trump took aim at another group of his favorite “enemies,” Jerome Powell and the Federal Reserve. On Wednesday, the Fed adopted a third straight interest rate cut, and Powell appeared to signal to Wall Street that there won’t be any more easing heading down the pike.

With a new target range of 1.5% to 1.75%, interest rates are historically low, but Trump has long advocated for the US central bank to mimic its European peers and drive rates into negative territory.

….our manufacturers. We should have lower interest rates than Germany, Japan and all others. We are now, by far, the biggest and strongest Country, but the Fed puts us at a competitive disadvantage. China is not our problem, the Federal Reserve is! We will win anyway.

But if neither the impeachment vote nor the Fed is driving equities lower today, what’s the real trigger? Ironically, it appears to be the very thing that Trump claims is “not our problem,” China.

The Real Reason the Stock Market Is Tumbling

As CCN.com reported, a deluge of bearish trade war news dropped this week, including a Bloomberg report that suggests Chinese officials have all but given up on signing a comprehensive trade agreement with the Trump administration. The White House, investors might recall, has repeatedly said that the trade deal was 90% complete, stretching back to the first half of the year. 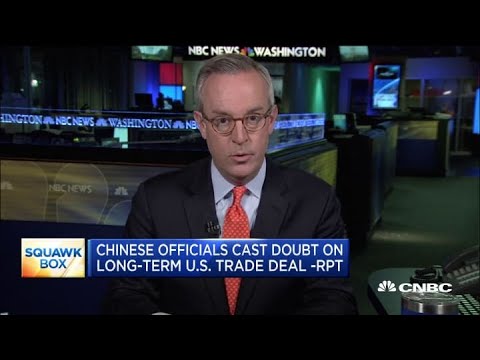 Trump may be particularly irate since his apparent attempt to head today’s stock market decline off at the pass failed to have the desired result.

Tweeting minutes before the markets opened, he teased a forthcoming announcement about the “phase one” trade deal, confirming that he planned to meet personally with Chinese President Xi Jinping at the signing ceremony.

China and the USA are working on selecting a new site for signing of Phase One of Trade Agreement, about 60% of total deal, after APEC in Chile was canceled do to unrelated circumstances. The new location will be announced soon. President Xi and President Trump will do signing!

Trump also said that this partial agreement constitutes “60% of total deal,” presumably referring to the comprehensive agreement that Bloomberg now alleges is in question.

The two countries are still ironing out the details of that phase one pact, but most analysts have said it will most likely only address “low-hanging fruit” – not the issues that exert a weightier impact on the US and Chinese economies.

The phase one deal was always about laying a foundation for future progress. If Beijing really has given up on a more robust accord, that partial deal – whenever it finally arrives – could deliver Trump an empty victory.