The Federal Reserve’s capitulation to President Trump and stock traders continued Wednesday, as policymakers voted to lower the benchmark interest rate for the third time in as many meetings. The decision was hardly a surprise, with markets pricing in a reduction with 98.3% certainty. 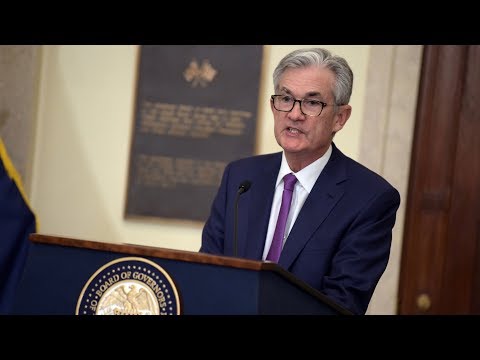 Members of the Federal Open Market Committee (FOMC) voted Wednesday to lower the federal funds rate by 25 basis points to a target range of 1.50% to 1.75%. Similar reductions were voted in by the Fed during its last two meetings in July and September.

In light of the implications of global developments for the economic outlook as well as muted inflation pressures, the Committee decided to lower the target range for the federal funds rate to 1-1/2 to 1-3/4 percent.

With the latest moves, the Fed is taking decisive action to shore up a sinking economy. Unlike previous rate-cut cycles, policymakers don’t have the 500-point cushion that’s needed to drag the economy out of recession. If the U.S. economy continues to decline, the only remedy for conventional monetary policy might be negative interest rates – not very conventional at all.

Even then, there’s no guarantee that loose monetary policy will keep interest rates under control or deliver the type of growth that policymakers are targeting.

A sharp decline in business investment weighed on the U.S. economy in the third quarter even as consumer spending and government outlays made up for the shortfall. As a result, U.S. gross domestic product (GDP) expanded just 1.9% annually between July and September, the weakest reading of the year.

While growth outpaced expectations, it was driven by catalysts like government spending as opposed to business investment. Investments made by business subtracted slightly from GDP growth for the quarter.

Some analysts believe the U.S. economy is simply moving back towards its pre-Trump growth trend, which partly explains the sharp slowdown in three of the last four quarters. President Trump’s sweeping tax reform triggered a surge in GDP growth in early 2018, but as government spending continues to grow, Washington’s burgeoning budget deficit is cause for alarm.

Despite the immediate stimulus brought on by tax reform, America’s manufacturing base continues to erode and foreign exchange volatility is placing downward pressure on corporate earnings. These are just some of the issues facing the U.S. economy presently.