Sacha Baron Cohen is back to doing what he does best: tricking people into showing their true feelings.

The comedian set up a concert the middle of a right-wing militia rally and encouraged them to sing-along to a blatantly hateful song.

And they enthusiastically joined.

The event organizers were furious. But that seems like a terrible reaction for a group that’s hellbent on protecting our constitutional rights.

The comedian dressed up in stereotypical hillbilly attire and took the stage on Saturday. Backed by a bluegrass band, he belted out hateful ideologies at a Three Percenter Rally. 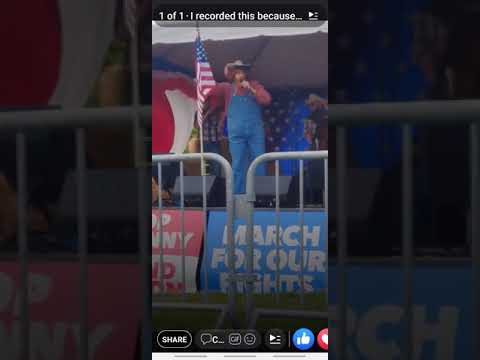 He encouraged the roughly 500 far-right wingers to sing along.

Sacha Baron Cohen had them actively engaged in a call-and-response session. He threw out names like Barack Obama, Bill Gates, Anthony Fauci, and “mask wearers.” Rally-goers responded by singing they should inject them with “the Wuhan Flu,” or “chop them up like the Saudis do.”

He even had them cheering about “nuking them (Chinese people) like we used to do.”

They tried to get him off stage. They tried to cut the generators. But they couldn’t because Cohen’s security blocked them.

That’s because they had a “very large donor” from California who contracted the security for them.

Sacha Baron Cohen infiltrated the Washington 3% (local rightwing militia) event in Olympia a few minutes ago. A last-minute big donor paid to sponsor the event, and hire security… And then that security kept the organizers from getting on stage to stop Cohen. 😂 pic.twitter.com/mllLkKBcpZ

A city council member in Yelm, Washington, posted an angry comment on Facebook. He said he was “disgusted” by Sacha Baron Cohen for pulling a “bullsh*t stunt.”

Cohen Is the Ideal Three Percenter

On the Three Percenters website, they define themselves as:

A national organization made up of patriotic citizens who love their country, their freedoms, and their liberty. We are committed to standing against and exposing corruption and injustice.

That sounds like exactly what Sasha Baron Cohen was doing. He’s a “patriotic citizen” who exposed the injustice, racism, and hatred of the festival-goers.

Their website even has a handy checklist of what makes a Three Percenter. Cohen checks off every box.

Sacha might’ve been the most authentic Three Percenter at their own rally. I guess I’d be mad too.