When Meghan Markle and Prince Harry walked out on their royal duties after enjoying a $40 million taxpayer-funded wedding, I knew this day was coming.

However, for the sake of Prince William, the Queen, and Prince Charles, I hoped I was wrong.

The nonsense about wanting to get out of the media spotlight and Prince Harry being triggered every time he heard a camera’s click may have fooled some people, but it didn’t fool us all.

The reason for leaving the royal family was to thrust themselves firmly into the spotlight and earn as much money as possible, hawking the royal titles around America.

Those camera clicks aren’t quite so triggering when they’re helping put dollars into the bank account, are they, Harry?

Short of wanting privacy, Meghan Markle and Prince Harry are the exact opposite. They’re relishing the prospect of being a weird sideshow attraction for Americans who live and die by celeb culture.

While we were forever told that the big media companies in the U.S. were falling over themselves to work with the Sussexes, it would appear that wasn’t the case at all.

If you have companies lining up to work with you, you certainly wouldn’t be shopping yourself around like some novice writer hoping to catch the eye of a charitable publisher.

And yet, shop themselves around is exactly what Meghan Markle and Prince Harry did. According to Netflix CEO Reed Hastings.

During an interview on CNBC, Reed claimed:

I’m so excited about that deal. They’re smart, they were shopping it around across all the major companies, and I think we really put together the best complete package. 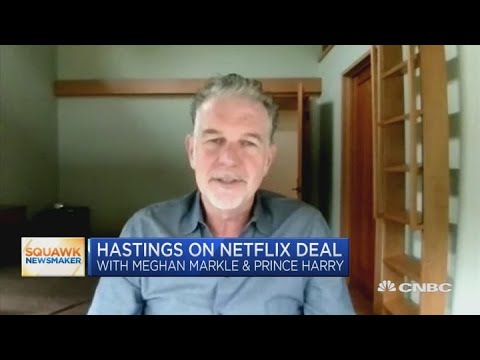 When the Netflix deal was signed, there was a statement of sorts from Meghan Markle and Prince Harry addressing the kind of content their fans can expect:

Our focus will be on creating content that informs but also gives hope. As new parents, making inspirational family programming is also important to us.

Now that all sounds well and good, but when prompted in his interview with CNBC, Netflix CEO Hastings commented:

It’s going to be epic entertainment. We’re going to do a wide range of entertainment with them. I can’t tell you any more than that about it at this point, but I think it will be some of the most exciting, most viewed content next year.

I don’t know about you, but when someone tells me a show on Netflix is informative and provides hope and has an inspirational family theme to it, I wouldn’t be thinking it’s going to be “epic entertainment” and “exciting.”

Netflix has its idea of “epic entertainment” and “exciting.” I don’t think Meghan Markle and Prince Harry’s notions fit the bill

Look at the best original TV shows that are somewhat based in reality on Netflix.

And of course, there’s the crown jewel in reality-based television.

Something tells me that Meghan Markle and Prince Harry telling us how hard it is to raise a child in Santa Barbara when the paparazzi have their drones out isn’t going to qualify as “epic entertainment.”

And sadly, neither will any of their self-righteous woke nonsense.

Netflix wants “epic entertainment,” and it believes that Prince Harry is a doorway to the real-life version of The Crown

So we know that Netflix loves The Crown. It’s one of their best-ever shows, and I even have to admit that I cannot wait for the next season to drop.

However, if you’re a Netflix exec, you’re already thinking about what could possibly top that?

What could be better than actors playing the role of British royalty?

Well, what if we had an actual British Prince? Now, that’s money.

All they have to do let him and his Z-list wife produce some woke nonsense, while in return, they can press on with the real agenda behind the content deal they signed.

Access to the inside scoop on the most famous family on the planet.