The cat’s out of the bag. Assassin’s Creed Valhalla will let us draft in the help of a feline friend to keep our longboats free of vermin.

Hot on the heels of two major leaks earlier in the week, a much shorter gameplay snippet showcasing the recruitment process in action surfaced online overnight. 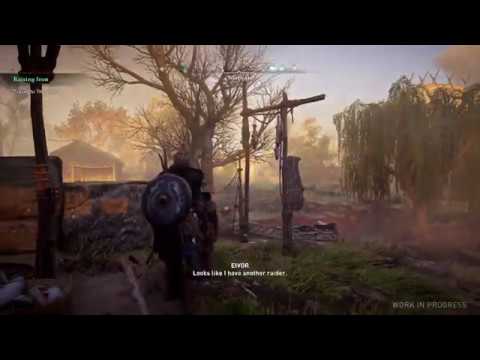 While traipsing through the village of Northwic (possibly modern-day Norwich?), protagonist Eivor comes across a snow-white kitty called Nali. A short chase ensues as Nali heeds the call of a Norse child.

It turns out that Nali’s pretty snobbish about who can pet him and hasn’t let anyone come near since his owner Kottr packed it in. Alongside being a fearsome Saxon-downing Viking, Eivor moonlights as a cat whisperer in Assassin’s Creed Valhalla.

One thing leads to another, and before long, Nali’s officially part of Eivor’s raiding party – ‘every long ship needs a brave cat for luck, and for the rats.’ ‘World Event completed – Raider Cat’ soon flashes across the screen.

Although the post points to an Xbox One release specifically, it’s safe to presume it will arrive on PlayStation 4 and PC on the same date. There’s no word on a next-gen release. That’s par for the course, though, as Sony and Microsoft have yet to publicize a definitive launch date.

This also seems to the case with yet another Far Cry 6 leak. A French-dubbed announcement trailer hit the inter-web late yesterday. Presumably, it’s the very one Ubisoft will unveil today.