Trump’s trade war was mostly out of the headlines as JPMorgan Chase, Johnson & Johnson, and UnitedHealth Group sent the stock market soaring, defying a gloomy growth outlook report from the IMF.

There was no denying the excellent mood on Wall Street, and all the major US stock market indices rose by around 1% or more. Minutes before the closing bell, the Dow Jones Industrial Average had recorded a 260.14 point or 0.97% rally to trade at 27,047.50.

Despite the positive risk environment, oil prices were subdued, while the price of gold dropped sharply amid the rally in the Dow.

The British pound exploded higher on hopes for a last-minute trade deal between the UK and EU. A Brexit deal would be good news for US stocks, as the grim outlook for European growth has been a concern for some time across the Atlantic.

As earnings season kicks off in a profoundly positive way for a couple of the Dow’s most significant stocks, a concerning forecast from the IMF has largely been ignored.

Economists expect global growth to slow to the worst level (3.0%) since the financial crisis in 2008, primarily due to rising geopolitical tensions. 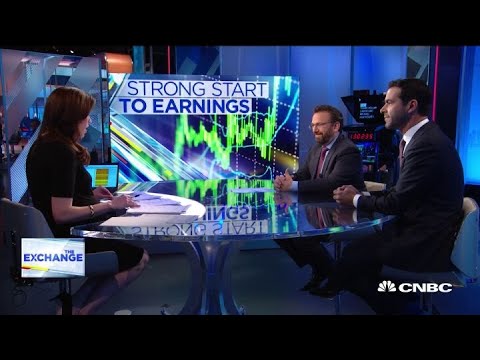 Getting ahead of this report, Donald Trump and China appear to be pushing for a de-escalation in the trade war to help support stock market sentiment.

Arguing the thesis that Donald Trump’s primary goal in declaring the phase one deal was to get markets moving higher again, senior economist Bill Diviney at ABN AMRO warned that it is premature to forecast an end to the trade war, as he wrote:

“Trump already labeling [the agreement]a deal suggests in our view an attempt to support market sentiment. Indeed, nothing has actually yet been agreed in writing. The escalation of trade/tech tensions between the US and China since early 2018 has been a key headwind for global growth… We have seen over the past month some goodwill gestures by both sides suggesting a potential shift in political calculus in both Washington and Beijing. This latest development follows that trend – with hostilities seemingly on hold rather than definitively ending.”

With plenty of positive trade war news priced into the Dow, the potential for gains to unwind remains high if the confrontation with China escalates further. Obstacles lurk ahead of the signing ceremony, as China still wants more tariffs removed before they will sign the deal.

It was a day of big winners in the Dow 30, as impressive earnings from UnitedHealth sent the stock soaring a stunning 8.3%.

Risks do remain for this stock, as Tuesday’s Democratic primary debate will feature Elizabeth Warren as a frontrunner for the party’s presidential nomination. Any sign of Joe Biden performing poorly raises the probability of Warren winning the presidential election and pushing her bold plans for healthcare reform.

Johnson & Johnson shrugged off opioid woes to rally 1.76% after its own impressive numbers.

Apple stock was notably subdued, with no news to spark any volatility, while Caterpillar appears to be reveling in the more positive relationship between China and the US with a 2.1% rally.