The Dow Jones rallied once again on hopes that China is ready to make a limited trade deal with the Trump administration that would prevent new tariffs from kicking in on Oct. 15.

The positive mood in the stock market was tempered briefly by clear signs of aggression from Turkey in Northern Syria, but even this wasn’t enough to hold down the Dow.

FOMC minutes had almost no impact on stocks after Jerome Powell’s media blitz over the last few days. Likewise, Joe Biden formally stating for the first time that Trump should be impeached had no discernible effect on the Dow.

Commodity markets saw a strong rally in crude oil as hopes for a trade deal between the US and China boosted the growth outlook. Metal prices were also generally higher, as gold and silver benefited from a softer dollar.

Stock markets are clearly enjoying the fact that China may want to make a deal with Trump. A Chinese commitment to buy more pork from US farmers could be the “surprise” that Larry Kudlow teased last week.

Unfortunately for Dow bulls, rather than making an explicit concession, China might just be acting out of necessity. A bad case of swine flu devastated supply and sent Chinese pork prices soaring. US farming exports have been attacked relentlessly by China seeking to exert maximum political pressure on Trump, so the subtext of this move is what stocks are focusing on.

It is astonishing that despite a slew of US trading bans on Chinese companies, the giant Asian economy still showed up ready to talk, suggesting the trade war may be biting hard. 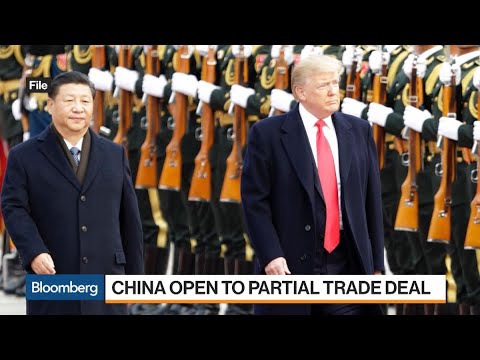 Turkish Aggression Not Yet Hitting the Dow

Turkish aggression against the Kurds in Northern Syria is threatening sentiment after airstrikes prompted Trump to state that Turkish moves were a “bad idea.”

This comes after Trump threatened the Turkish economy with destruction after announcing the US military’s exit from supporting their long-time ally in the fight against the Islamic State.

So far, none of these concerns appear to have had a significant effect on the Dow Jones.

CNN Exclusive: Turkey says Trump knew ‘precisely’ about scope of N. Syria operation. “President Trump and President Erdogan have reached an understanding over precisely what this operation is,” Gulnur Aybet, Senior Adviser to the President of Turkey told @camanpour

Focusing on the trade war, Chief International Economist James Knightley at ING poured cold water on any hopes that an end is in sight in the US-China standoff. Referencing Trump’s commitment to ensuring that the trade deal is comprehensive, the analyst notes that pressure to be tough on China could outweigh the president’s concerns about keeping the stock market rising, writing:

“The President has said he doesn’t want a mini deal, indicating that he’s not ready to water down his demands. At least not yet. We think it’s possible that a further deterioration in the US economy could lead Trump to take a few steps back, but he has to walk a fine line. Trump won’t want to give in so much that he’s viewed as a loser in the trade war.”

Knightley’s conclusion is that Dow bulls can at best hope that markets may be able to dodge higher tariffs. Ultimately, however, ING’s view is that both Trump and China are in no hurry to make a real deal.

“For now, both American and Chinese negotiators will be reluctant to acquiesce. This means the best obtainable result for the upcoming round of talks would be for the US to put on hold higher US tariffs on the 15 October and 15 December in exchange for a Chinese commitment to step up buying of American agricultural and energy products,” he wrote.

Most of the Dow 30 was shining in the green on Wednesday, headlined once again by Apple stock, which jumped 1.34% after receiving yet another upgrade from analysts. It was broadly a good day for tech, as Microsoft and Intel also enjoyed the positive China storyline.

Chevron and Exxon Mobil were both higher as the rally in oil prices appeared to help lift both companies at least 1.3%.

Johnson & Johnson languished among the worst-performing stock across the three main US stock indexes, down 2.2% after a massive $8 billion verdict was announced against the company.