Ex-Dallas Cowboys wide receiver Dez Bryant hasn’t pulled any punches about his former employer since they ditched him in early 2018. His disdain for now-fired Cowboys head coach Jason Garrett was even less of a secret.

But Garrett is now gone—and Jason Witten may not be far behind. That possibility led Bryant to float the idea of a Cowboys comeback:

Why Adding Dez Bryant Is Tempting

Bringing Jason Witten out of retirement did not have the impact the team had hoped. While Witten hasn’t announced his plans for 2020, rumor has it that he may be interested in joining Jason Garrett with the New York Giants.

Should that happen, Witten’s “role” in the offense would be open.

Perhaps those snaps should just go to Blake Jarwin, but having a guy like Dez Bryant in that role does have merit. Witten is about four inches taller and 40 pounds heavier, but Bryant is faster, more athletic, and more of a ball-hawk than Witten ever was.

Fans could always count on Bryant to fight for the ball—and he usually won. That’s what you want from a receiver when you enter the red zone.

Is he physically ready for the NFL grind? Based on his training videos, it seems like the answer is yes. But we won’t know fur sure until someone brings him in for a workout.

Since he is willing to play a reduced role, it sounds like the team should do its due diligence and bring him in.

Why the Cowboys Would Be Stupid to Do It

Could Dez Bryant bring something to the table for the Cowboys offense? Absolutely. His ability to play was hardly ever in question. When he was released, his contribution in Scott Linehan’s offense just wasn’t worth what the Cowboys were paying him.

That, combined with his tantrums, turned him into an expensive distraction. 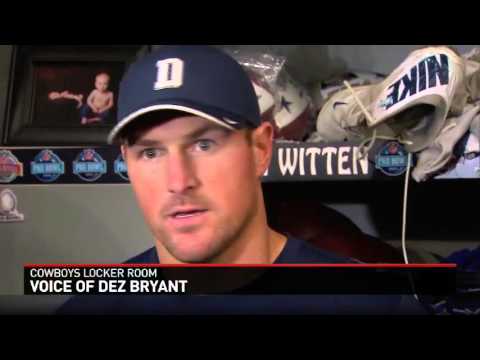 So, why should anyone believe this time is going to be any different? Yes, he is saying all the right things. At least some of the time.

In an interview with SI.com, he talked about “respecting” his role. Then he pivoted to saying that Jason Garrett’s firing meant he wouldn’t need to be “limited.”

The question the Cowboys must answer is whether Dez Bryant is really willing to be a role player. That means regularly being the third option. That means not getting targeted for entire games.

Can he keep his infamous ego in check and contain the “passion” that led to those embarrassing sideline tantrums?

But Mike McCarthy needs to build his version of the Dallas Cowboys – a new and better version. Welcoming back a piece of the failed puzzle from the Jason Garrett era would risk bringing back the drama. The last thing Mike McCarthy needs is more drama – or even the possibility of it.

Dez Bryant is an important part of Cowboys history, but he’s not a piece of their future. McCarthy needs to make sure he stays in the past.