Devonte’ Graham’s red-hot start is real, paving the way for the Hornets guard to run away with the Most Improved Player award.

Devonte’ Graham’s red-hot start isn’t a flash in the pan after all.

The Charlotte Hornets guard dropped a career-high 40 points on Wednesday night, leading his team to a thrilling comeback victory over the Brooklyn Nets. He went 12-of-21 from the field, drained seven of his 12 three-point attempts, and was 9-of-11 at the free-throw line, also chipping in five rebounds and five assists.

Those stellar numbers, though, don’t do the drama of his performance justice. Graham scored seven straight points for Charlotte in crunch-time, including a pair of tightly-contested, back-to-back jumpers with under a minute remaining that effectively put the game away. 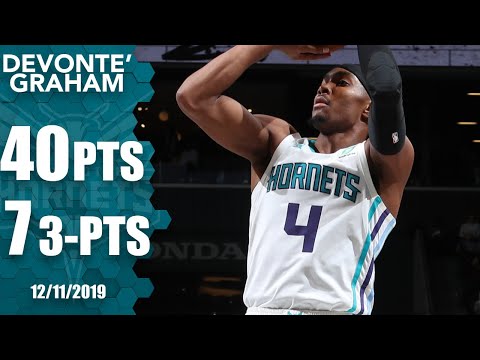 To the vast majority of those watching, Graham’s game-long heroics no doubt seemed an aberration. But for the Hornets’ players, coaches, and fans, his jaw-dropping play was just further confirmation of what they’ve seen in the season’s early going.

Graham is averaging 20.0 points, 3.7 rebounds, and 7.6 assists per game in 2019-20. He’s shooting 42.9 percent on nearly nine three-point attempts per game, an elite blend of accuracy and frequency from beyond the arc.

How quickly will Devonte' Graham climb this list? 🤔🐝 pic.twitter.com/u7YftS5jY5

Those are star-level numbers, obviously, and the eye test proves they’re no fluke. Graham plays with an unrelenting sense of confidence and control reserved for the game’s best floor generals, constantly manipulating the floor to create good looks for his teammates while leveraging his imminent threat as a long-range shooter.

The sophomore guard has scored at least 29 points in four of the Hornets’ last five games. And while the three ball certainly serves as the basis of his game, it’s not like Graham is putting up huge numbers by virtue of draining standstill jumpers. Only six players in the NBA are launching more off-dribble threes per game than Graham, and none of those players – James Harden and Trae Young among them – shoot better on those inherently difficult attempts than his 42.9 percent. 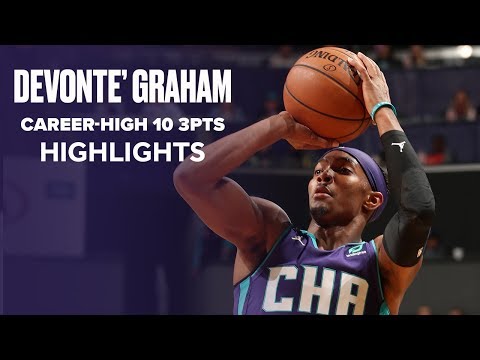 The scope of Graham’s breakout isn’t limited to the box score or advanced individual numbers, either. He’s been the Hornets’ panacea offensively through the first seven weeks of the season.

They score 18.6 points per 100 possessions more when he’s on the floor compared to the bench, the highest number in the league, per Cleaning the Glass.

Charlotte shoots far more efficiently, draws far more fouls, and turns the ball over far less with Graham in the game, too.

The NBA’s Most Improved Player…by Far

Pascal Siakam has made yet another leap this season, forcing his way into the MVP conversation. Brandon Ingram is finally living up to his sky-high potential, and Andrew Wiggins deserves immense credit for turning his career around. Davis Bertans is suddenly among the several most dangerous, versatile shooters in basketball. Devin Booker deserves mention here, too.

But regardless of his competition, the Most Improved Player race begins and ends with Graham.

The extent of his development is truly historic. Graham averaged 4.7 points per game and shot 28.1 percent from three last season, splitting his time between the NBA and G-League. He showed major improvement from beyond the arc in Summer League, but hardly the kind that portended career-changing growth to come.

There was just nothing before this season tipped off to suggest that Graham was on the verge of something like this. He was a second-round pick who spent four years in college, after all.

But now Graham, who forced his way into the starting lineup after 10 games, isn’t only the Hornets’ best player, but their most important foundational piece of a long-awaited rebuild. By drastically altering the trajectory of his career, he’s done something similar for a Charlotte team low on proven young talent.

And at the end of the season, Devonte’ Graham should be named the NBA’s Most Improved Player because of it.

September 20, 2020 No Comments
← PreviousLe’Veon Bell’s Bizarre Bowling Night Is Proof the Jets Must Trade Him
Next →Houston Rockets’ Clutch City Dancers Invite Lizzo to Join Them for a Dance