By CCN.com: A Wall Street legend warns that you should expect more pain in the stock market as President Donald Trump’s trade war with China rages on.

Scott Minerd — the Global Chief Investment Officer and co-founder of Guggenheim Partners – says equities could suffer an even bigger sell-off this summer than they did in last year’s fourth quarter bloodbath.

Scott Minerd: End of Decade-Long Bull Market Is in Sight 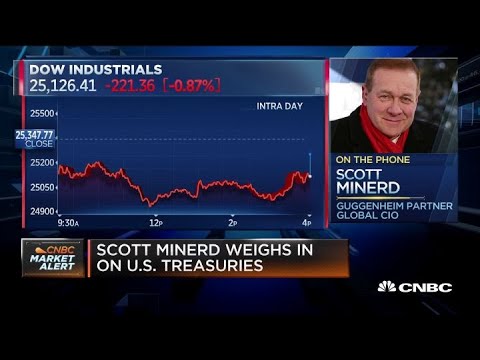 “The trade tensions are likely to get a lot worse because we have never in modern times had a trade war like this.”

In a recent research note, he continued:

“Our models signal markets will make new lows in the summer. A break below December lows would mark the end of the bull market that began in 2009, Something we expect.”

Word of another possible stock market crash in the wake of U.S.-China trade tariffs comes amid a dreary week and month for the Dow Jones industrial average, S&P 500 index, and other U.S. equities benchmarks. This week, the Dow closed below 25,000 for the first time in months as investors flocked to government bonds over trade war fears.

Even a Fed rate cut might not be enough to hold back the onslaught.

If the stock market follows Scott Minerd’s projections, the Dow Jones Industrial Average will drop 13% from its current level by summer’s end.

The S&P 500 will take a 16% loss from its current benchmark in this worst-case scenario.

Tech companies will take the most trade war damage with the Nasdaq Composite Index sliding 18% from today’s trading levels.

And here’s the tragic irony: It wouldn’t be the first time tariffs spurred a stock market crash and a massive economic depression in the United States. In fact, tariffs played a major role in causing the Great Depression of the 1930s.

In 1930, Sen. Reed Smoot and Rep. Willis C. Hawley sponsored the Tariff Act of 1930, commonly referred to as the Smoot-Hawley Tariff Act. It levied the second-highest tariffs in 100 years on 20,000 imported goods.

At the time, 1,028 economists signed a letter asking Herbert Hoover to veto the bill. Henry Ford visited the president personally to speak against the tariffs. J.P. Morgan’s CEO practically begged him not to sign it.

There is a consensus among historians today that Smoot-Hawley made the Great Depression worse. Although it wasn’t passed and signed into law until June 1930, the stock market anticipated its passage, much as investors are closely watching the trade war today.

As the Cato Institute notes, the bill passed the House in May 1929, and stock prices immediately dipped. After rallying to a high point again in September, the stock market crashed spectacularly on Black Thursday shortly after the bill was advanced by the Finance Committee to the Senate floor.