The NBA’s next champion will almost certainly be decided by one of its many superstar tandems. The most active off-season in league history culminated in not just the most wide-open title picture in nearly a decade but the formation of several new duos poised to propel their teams to contention for the Larry O’Brien Trophy.

It’s far too soon to count Luka Doncic and Kristaps Porzingis among them. The Dallas Mavericks are on the outside looking in at the playoffs as the regular season quickly approaches, the victims of an ever-stacked Western Conference featuring 13 teams with postseason aspirations. Doncic, the reigning Rookie of the Year, is still just 20, and Porzingis hasn’t taken the floor since tearing his ACL in February 2018.

The Mavericks should eventually assume their long-familiar status as a surefire playoff team, and if all goes according to plan, annual championship contender. Until then, Doncic and Porzingis stand out as the most unknown and intriguing of basketball’s top partnerships, both harking back to Dallas’ beloved past and serving as an example of the NBA’s increasing reliance on international talent.

"This group of guys, led by Doncic & Porzingis, has a chance now to define what Mavericks culture is going to be like going forward."

😤Catch tipoff against the Thunder on @FoxSportsSW at 7:30PM CT😤 pic.twitter.com/HDDC8mQPFw

The Mavericks won their only title in 2011, with franchise icon Dirk Nowitzki leading an underdog group of veterans past the star-laden Miami Heat. But the team’s true heyday began a decade earlier, when Nowitzki established himself as one of basketball’s most unique scorers and Steve Nash came into his own as an all-encompassing offensive influence.

Dallas made the playoffs every year from 2000-01 to 2003-04, ranking first in offensive efficiency for three consecutive seasons. Nowitzki and Nash, the former a German import and latter born in Canada, looked and played nothing like elite tandems of the past and present. Michael Jordan and Scottie Pippen led the Chicago Bulls to separate three-peats in the 1990s by overwhelming opponents athletically, while Shaquille O’Neal and Kobe Bryant lifted the Los Angeles Lakers back to championship glory through a time-honored blend of outside-inside dominance.

Nowitzki and Nash were built differently, their effectiveness based more on world-class skill and cunning than superlative physical attributes, a reality that many believed put a ceiling on the Mavericks come the postseason. Bowing to that criticism and wary of affording Nash the massive payday he’d earned, owner Mark Cuban separated basketball’s most devastating offensive duo in the summer of 2004, letting Nash walk to the Phoenix Suns in free agency, with whom he’d immediately win back-to-back MVPs.

Doncic and Porzingis – from Slovenia and Latvia, respectively – aren’t Nash and Nowitzki. Holding either up to standards of two of the best players of all time isn’t fair. But after years as a postseason also-ran and lottery team following that crowning achievement in 2011, a pair of international stars gives Dallas reason to believe in a lasting championship future yet again – and this time around, Cuban seems intent on keeping them together.

Mark Cuban on Luka Doncic and Kristaps Porzingis: "Our goal is to keep them together for the next 20 years."

The best international tandem ever?

Doncic, a preternatural passer and ball handler at 6-foot-8 with elite shot-making ability, is broadly considered a future MVP candidate. Porzingis, 24, was on the same track with the New York Knicks before shredding his knee, emerging as one of basketball’s most impactful rim-protectors while continuing to hone his rare package of offensive skills at 7-foot-3. 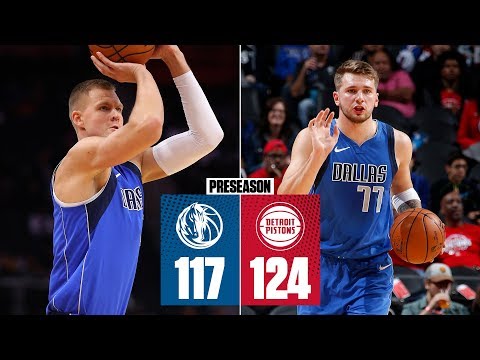 Nothing is guaranteed with Porzingis. Dallas wouldn’t have given him a max-level contract extension over the summer if it didn’t have confidence in his health, but there’s simply no track record of players possessing his size and athleticism recovering from a serious lower-body injury.

If his hiatus proves a blip on Porzingis’ road to superstardom, he and Doncic are good enough to ultimately take the Mavericks to heights Nowitzki and Nash never could. And should that prove the case, Dallas’ new franchise cornerstones won’t only go down as the most successful tandem in team history but the best international partnership ever in a league where three of the top-six vote-getters for MVP were born outside the United States.