The erosion of America’s manufacturing sector intensified at the end of the third quarter, as industrial production posted a steep drop month-over-month.

While some of the decline was attributed to temporary factors like the General Motors strike, the downturn is part of a much broader trend that has intensified in the wake of the U.S.-China trade war.

Industrial production – a gauge of U.S. factory output at mines, utilities and manufacturing companies – fell 0.4% in September, the Federal Reserve reported Thursday. The decline was much bigger than the 0.1% slump analysts had expected.

Compared with a year ago, industrial production fell 0.1%, marking the first annualized drop since 2016, according to the Financial Times.

A deep-dive into the numbers reveals steep declines across two of the three main industry groups – manufacturing and mining. Manufacturing output declined 0.5% from August while mining activity fell by 1.3%. Utilities production jumped 1.4% month-on-month.

Among the three groups, manufacturing production was alone in falling year-over-year. The sector posted an annual drop of 0.9%. Major market groups including consumer goods and business equipment also fell compared with a year earlier.

Comprising roughly 12% of U.S. gross domestic product (GDP), the manufacturing sector has been in firm retreat for decades due to globalization and the rise of so-called private equity firms. Private equity is said to have killed some 600,000 retail jobs over the past decade. Their suppliers have also been hit hard.

Manufacturing’s share of employment has also dwindled throughout the decades. Now, less than 10% of Americans are employed by the sector, down from roughly a quarter in the early 1970s.

While many economists have attempted to portray this in a positive light, arguing that the United States has shifted towards a knowledge-based economy, the labor market recovery of the past ten years paints a different picture. Nonfarm payrolls data since the financial crisis have consistently shown strong employment growth almost every month, but wages have not risen in commensurate fashion. In fact, real wages have been stagnating for decades.

This is another way of saying that the quality of jobs being created is low. America’s post-manufacturing labor market has plentiful jobs that require lower skills and hence pay much less than the factory work that preceded them. Average hourly earnings have increased markedly under President Trump but are still below the long-run average.

Trade-war uncertainty is said to have dragged U.S. manufacturing to ten-year lows in September, according to the Institute for Supply Management’s monthly index. The employment measure also fell to its lowest since January 2016. 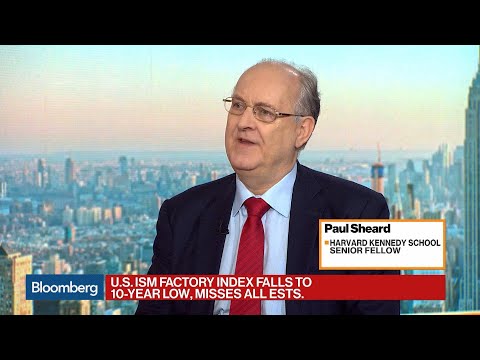 It’s not entirely clear whether the recently announced ‘phase one’ trade agreement between the United States and China will boost manufacturing in the short-term. The manufacturing PMI numbers are likely to improve as managers express less uncertainty about the future business climate. How this translates into actual production is yet to be seen, especially given the focus on U.S. agriculture in the latest agreement.

Another key gauge of manufacturing demand – namely, U.S. durable goods orders – has declined in four of the past 12 months. Losses, when they have occurred, have been steep.

A slowing manufacturing sector has weighed down U.S. GDP, with the latest figures out of the Atlanta Federal Reserve showing grim expectations for the third quarter. The Atlanta Fed believes the economy expanded just 1.8% annually between July and September, down from a disappointing 2% increase in the second quarter.