Dow Tanks After US Manufacturing Dives Below ‘Magic Mark’

The Dow Jones endured a torrid session on Tuesday, diving around 300 points as a whirlwind of bad news enveloped US stocks.

A weaker fixing of USD/CNH rocked markets, indicating that China is once again weaponizing the yuan to counteract a fresh round of US tariffs.

In domestic data, ISM US Manufacturing, another critical recession indicator, plunged below 50.

Nor did the president do much to help the stock market this morning, as he greeted the opening bell with the revelation that he is “only going to get tougher on China.” Such a response is precisely the opposite of what Wall Street wants to hear.

….And then, think what happens to China when I win. Deal would get MUCH TOUGHER! In the meantime, China’s Supply Chain will crumble and businesses, jobs and money will be gone!

The UK provided another bout of negative news, as Boris Johnson spectacularly lost his majority in parliament during his Brexit speech. An emergency debate to wrestle control from the prime minister is currently underway.

It was not just the Dow that struggled. Both the S&P 500 and Nasdaq suffered substantial declines in broad risk-off conditions. Perceived havens gold, silver, and even bitcoin rallied on the day. 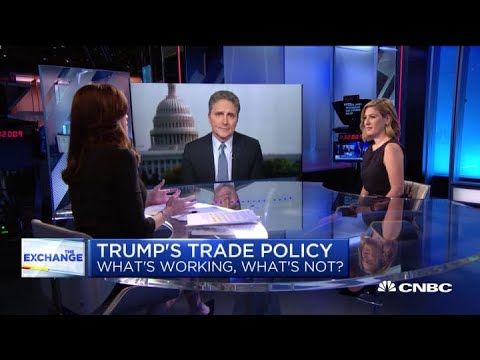 Focusing on the rough conditions for manufacturing, Anders Svendsen, a macroeconomist at Nordea, noted on Tuesday that the latest ISM reading has now dropped beneath a very significant level.

The analyst also sees this as rocket fuel for the doves at the Federal Reserve:

“ISM manufacturing dropped below the magic 50-mark in August, pointing to a manufacturing sector contraction for the first time since early 2016. New orders from abroad fell to 43.3, which is by far the weakest reading since the financial crisis… Today’s release adds fuel to the dovish fire under the Fed. Buckle up for another rate cut at the next FOMC-meeting (18th of September).”

In the Dow 30, there was a clear laggard as Boeing dropped more than 2.6%. The aerospace company was hammered by news of fresh delays in the return of the 737 Max, mixing with bearish news around some engine troubles its new ultra-long-range jet (777X) has had over the last few weeks.

Despite this, Pfizer was notably impressive, rising 1.4% as investors appeared to enjoy its sizable profit margin during this uncertain time.

Finally, Walmart (+0.25%) was the last Dow stock making headlines. The retail giant announced it would limit firearm and ammunition sales in its stores.