Despite the calamitous events of this year, the stock market is roaring back.

The Dow Jones and S&P 500 are well on their way back to peak valuations. Meanwhile, the Nasdaq has already hit record highs.

Using markets as a barometer for how well things are going, instead of the wild stories that make news headlines, the world is doing well. Stock market prices indicate investors expect businesses to make a lot more money in the future. That’s only possible in a world that’s actually mostly stable, peaceful, not very corrupt, and very resourceful.

But that’s only true in theory, not necessarily all that valuations reflect.

Also in the mix is some amount of froth: actively churning liquidity, momentum, fear of missing out, casual investing by headline scanners, and 2020’s QE operations.

The $3 trillion tsunami in Federal Reserve liquidity flooding the financial system this year is not to be overlooked as a factor in stock prices.

Many economists and bankers (for instance, Barclays’ CEO) believe low interest rates and yields send capital flowing to risk assets with potentially higher returns. As a result, conditions are ripe for a bubble in asset prices and the inevitable market correction.

The proof that there is a stock market bubble is that stock prices have decoupled from corporate financials over the last year. Instead, they’re moving together with other asset classes over twice as much as they did during the Dot Com bubble.

An analysis from JPMorgan Chase has found a stunning one-year correlation across asset classes. Share prices are moving through a macro moment in financial history:

Financial markets across the globe are moving together the most in two decades, in a world where little else matters but the pandemic-driven economic trajectory and Federal Reserve stimulus.

The year’s lockstep in price movements holds across 30 assets. The JPMorgan analysis included S&P 500 stocks, bonds, commodities, and emerging-market shares, among others.

The Federal Reserve’s game-changing interventions in the market appear to be driving up share prices along with everything else, decoupling stock market valuations from the underlying businesses and finances.

Legendary British billionaire investor Jeremy Grantham said this week that the rebound in stock prices is “crazy.” He says it’s a stock market bubble that might prove painful when it collapses:

My confidence is rising quite rapidly that this is, in fact, becoming the fourth ‘real McCoy’ bubble of my investment career.

The 81-year-old successfully predicted three previous market bubbles in his career: Japan’s in 1989, the Dot Com crash in 2000, and the housing market crisis in 2008. In the last two U.S. financial crises, correlations within asset classes were high. A rising tide of liquidity lifted all tech startups and residential houses.

Now cross-asset correlations are high, signaling a massive “everything bubble.”

Other Signs of A Stock Market Bubble 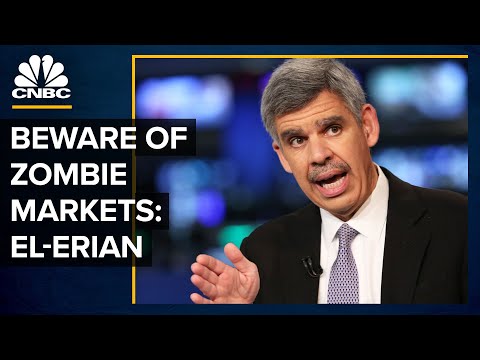 Mohamed El-Erian, chief economic adviser at Allianz, warned this week about zombie companies. He said the flood of Fed cash might be “keeping them alive today, but it comes at a cost.” He said the Federal Reserve’s actions this year prevent markets from allocating capital efficiently:

Zombie markets are markets that are completely mispriced, they’re completely distorted. Why? Because there is a policy view that you need to subsidize everything in markets for now.

Charles Schwab & Co. Chief Investment Strategist Liz Ann Sonders warned in May that zombie company stocks have never outperformed the S&P 500 by more than they did in April. It’s another sign there’s a stock market bubble brewing.

In January, the median Enterprise Value (EV) to sales was twice the Nasdaq bubble peak levels. That was before the pandemic crisis ground the economy to a crawl. And the Buffett Indicator shows the total U.S. stock market cap relative to GPD is higher than just before the tech stock crash and 2008 financial crisis.