Harrison Butker kicked a 44-yard field goal as the clock expired, giving the Kansas City Chiefs a 26-23 victory over the Minnesota Vikings. As Butker sprinted the Arrowhead Stadium field in triumph, among the first teammates to greet him was one wearing street clothes. Instead of continuing the celebration, though, Butker briefly managed to restrain his gusto.

Better not to risk re-injury of the NFL’s reigning MVP, especially with the Chiefs’ once-fading Super Bowl hopes re-surfacing so quickly.

“I wanted to embrace him,” Butker said of Patrick Mahomes, per The Athletic’s Nate Taylor, “but I’m like, ‘No, he can’t get hurt.’”

The stunning victory pushed Kansas City to 6-3, keeping it apace in the race for home-field advantage come the playoffs. But to anyone paying attention over the past few weeks, the Chiefs’ win was less about where they sit in the standings as a reminder of what this team seems capable of playing at its peak.

Still, the Chiefs’ most significant injury came in Week 7, when Mahomes dislocated his knee cap. Already in the midst of a two-game losing streak, Kansas City held on to beat the hapless Denver Broncos, but its status as Super Bowl favorites merited revisiting nonetheless. An ensuing home loss to the NFC-leading Green Bay Packers, as Mahomes watched, only furthered the cause for concern with the Vikings visiting Arrowhead in Week 8. 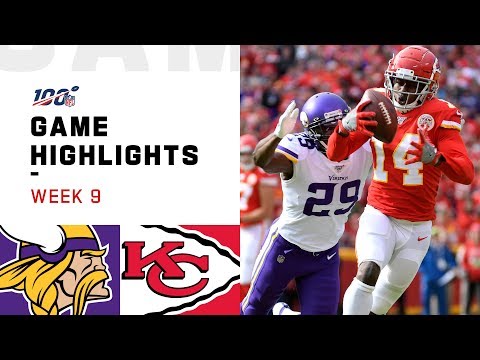 But the Chiefs, despite the absence of Mahomes, Fisher, Fuller, guard Laurent Duvernay-Tardif, and defensive ends Frank Clark and Alex Okafor, pulled out a win against Minnesota anyway, putting the rest of the league on notice as the most dangerous player in football nears his return.

From @gmfb: The #Vikings lost WR Adam Thielen to a reaggravated hamstring injury… while the #Chiefs are closing in on a return of QB Patrick Mahomes. pic.twitter.com/vOKg1xGQSB

Peaking at the Right Time

Kansas City overhauled its defense during the offseason, making wholesale changes to a unit that cost it a Super Bowl berth last January. But despite splashy additions like defensive coordinator Steve Spagnuolo and Clark, who had 13 sacks a year ago, the Chiefs’ defense showed little to no improvement early. Kansas City might have had a losing record when he was injured if not for Mahomes routinely rescuing an offense bitten by the injury bug, a possibility owed mostly to sustained struggles defensively.

Over halfway through the regular season, though, the Chiefs’ rebuilt defense is rounding into form. Kansas City made Kirk Cousins’ life hard on Sunday, while its previously-porous run defense held Dalvin Cook, the NFL’s leading rusher, to just 71 yards on 21 carries.

After keeping the high-powered Vikings in check, the Chiefs suddenly boast the league’s 16th-ranked defense, according to Pro Football Focus – a number that should only improve as Clark and company make their way back to the field.

Kansas City’s offense was limited by the Hill’s absence even before Mahomes went down. Health provided, it would be surprising if the Chiefs didn’t reclaim their status as the NFL’s most explosive offense over the season’s second half. And with the defense trending in the right direction, it seems plausible this team could finally muster the two-way balance it’s long lacked under Andy Reid.

Many left Kansas City for dead last month. But fortunes change fast in the NFL, and less than three weeks later, Mahomes and the resurgent Chiefs seem better situated than ever to fulfill preseason expectations of winning the franchise’s first Super Bowl since 1963.