Jake Paul fought the law, and the law won. Well, maybe it was actually a draw.

The YouTube “influencer” has been charged with one count of criminal trespass and another count of unlawful assembly after he participated in an Arizona looting spree.

While this seems like a step in the right direction, Paul is only getting charged with misdemeanors — a far cry from what other protesters are facing.

After the Scottsdale Police Department received “hundreds of tips” confirming that he was at the looting in Fashion Square, Jake Paul was finally charged with the two misdemeanor offenses.

Our investigation has revealed that Paul was present after the protest was declared an unlawful assembly and the rioters were ordered to leave the area by the police. Paul also unlawfully entered and remained inside of the mall when it was closed.

Per the Scottsdale police, because Paul wasn’t caught on camera “stealing anything,” he was only hit with the minor infractions.

Did they watch the same video we did? 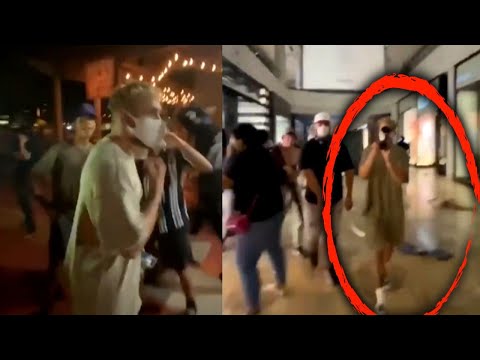 Naturally, Jake Paul’s noxious group of fans accepted his side of the story — that he was only there to “peacefully protest” and not to loot — because of course they did!

But that’s a far cry from what “non-influential” looters and protesters are being charged with.

While Jake Paul is getting by with just a slap on the wrist — for which he’ll probably have to pay a fine and volunteer to wash puppies to “pay back his debt to society” — other protesters are looking at a lot worse.

In Los Angeles, protesters and looters are possibly looking at federal charges — which could result in years of prison sentences.

In New York City, more than 400 people are still waiting to be processed in the filthy Central Booking holding cells, and judges are reluctant to process them (thus denying their right to due process).

And in central Illinois, young adults with no criminal records are being hit with “mob” charges for their participation in protests, while being accused of “looting” at Target.

It doesn’t seem to matter that we saw Jake Paul on camera in the thick of things.

It doesn’t seem to matter that he subsequently issued a half-baked apology to save himself from getting hit with serious charges.

And it really doesn’t seem to matter that he and his brother, Logan, have made a career out of disrespecting people, acting like fools, and being entitled white boys.

Once again, Jake Paul’s privilege saves him — something that the black and LatinX protesters cannot say. And until such time that they’re all treated the same in the eyes of the law, the protests will continue.