Jerome Powell told Congress Wednesday that the Federal Reserve has no recourse but to print more money when the next downturn hits.

That’s because low interest rates are “not really a choice anymore … [but] a fact of reality.” With low interest rates already baked into the fabric of the U.S. economy and financial system, the Fed can never go back to a normal policy regime. At least, not without major repercussions.

I’ll let the recently Twitter-banned ZeroHedge translate that for you: The Federal Reserve “can never again allow price discovery to take place” without toppling the house of cards it has created since 2008.

Basically, Powell just admitted that the ‘great U.S. economy’ can’t survive on anything but low interest rates and that ‘aggressive’ quantitative easing is the only cure when recession hits.

Of course, Powell left out the fact that the Fed has already returned to QE – albeit under a different name.

Since September, the central bank has been purchasing short-term Treasurys and mortgage-backed securities to save the overnight repo market from imminent doom. The size of the repo operations exploded at the start of 2020, a clear sign there’s something seriously wrong with the plumbing of the financial system.

Remember when the repo bonanza was supposed to be temporary? Well, Chairman Powell told Congress on Tuesday that the operations will continue until (at least) April: 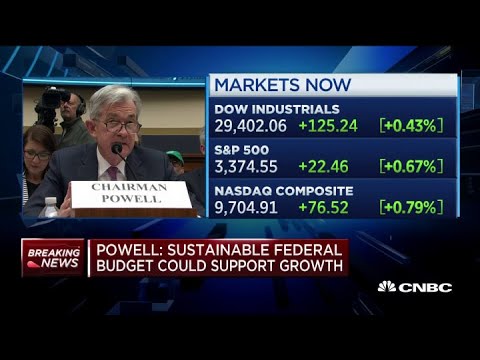 The Fed won’t disclose which bank(s) is under the most stress, but we have some ideas.

The Real Reason the U.S. Economy Is Screwed

The real reason the Fed can’t raise interest rates is because such a regime would topple an economy built on massive debt.

Last month, the Congressional Budget Office (CBO) predicted the U.S. budget deficit to exceed $1 trillion when the fiscal year ends on Sept. 30. The same CBO expects the deficit to grow by an average of $1.3 trillion between 2021 and 2030. With the appropriate rounding, that’s a cumulative gain of $13.1 trillion over the next decade.

Since debt serviceability largely depends on interest rates, any substantial (i.e. one percentage point) rise in rates could have a catastrophic impact on financial stability.

Much of the economy is financialized thanks to the Fed, so rising interest rates could disrupt all the paper wealth that has been created since the financial crisis. Financial assets relative to GDP is an obscene ratio – 5.6 according to Bank of America and the Fed – so monetary policy needs to accommodate all the investors who entrusted their financial future to the stock market and other ballooning assets.

Let’s also not forget what happened the last time the central bank raised interest rates – it triggered a bear market in the S&P 500. A 20% plunge in the stock market, culminating in December 2018, was all that was needed for the Fed to commence its walk of shame, beginning in January 2019 and ending in July when it slashed rates for the first time since 2008. (The Fed would go on to cut rates two more times after that.)

The Fed is now stuck in paralysis: Keep rates low and let the bubbles grow, unleash helicopter money when the next recession hits, erode U.S. dollar hegemony either way.

Disclaimer: The opinions expressed in this article do not necessarily align with the views of CCN.com.