‘Bubbles Everywhere’ Suggest a Stock Market Crash is Coming, According to Nobel Laureate

When Nobel Prize-winning economist and Yale professor Robert Shiller says there are “bubbles everywhere” in today’s market, it pays to listen up.

He cautioned that the impressive returns investors have been enjoying over the past few years are likely coming to an end, saying he expects U.S. stocks to return an average of just 4.4% each year over the next 30. Shiller says that in addition to the stock market, bubbles are also present in the bond market and the U.S. housing market. As investors search for any indication that a stock market crash is on the horizon, here’s a look at Shiller’s assessment. 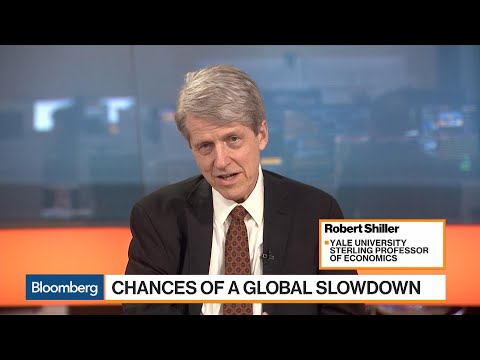 Shiller’s not the only one concerned about a U.S. housing market bubble— the number of experts waving caution flags has increased dramatically over the past month. Some point to falling new home sales despite tight inventory as a sign that the housing market is already starting to crash. Fannie Mae’s October sentiment indicator showed a 2.7 point decline, suggesting that Americans are starting to worry about shelling out for a new home. A research report by online real estate firm Zillow showed that nearly half of the real estate experts and economists it polled saw a housing market recession hitting the U.S. in 2020.

He’s also not alone in his assessment of the bond market, where skittish investors have piled in looking for a safe income stream. Former presidential candidate Ron Paul echoed that sentiment back in September in an interview with CNBC saying, “we’re in the biggest bond bubble in history, and it’s going to burst.”

Since then, the market has rebounded on promising rhetoric from the White House regarding trade talks with China. This summer, short term interest rates surpassed yields on longer-term debt, which many took as a sign that an economic downturn was on the horizon. The yield curve is back to showing a positive slope which has calmed recession fears— but for how long?

As Manulife Asset Management’s Michael Lorizio put it, “The path of least resistance is towards lower rates.” Worries about the macroeconomic climate are likely to creep in and drive yield’s lower in the longer-term.

Shiller’s most ominous warning came in relation to the equities market, where valuations have reached all-time highs. To evaluate how expensive the U.S. stock market is, Shiller developed the Cyclically Adjusted Price-To-Earnings Ratio (CAPE ratio). According to his research, the CAPE ratio is rarely as high as it is now. In 1929 the CAPE ratio reached the mid-30s and in 2000 it made its way to 45. In both of those cases, a steep stock market crash followed.

As of October 2019, the CAPE ratio was sitting at 31.4. While the market’s valuation could continue rising toward 45, as it did back in 2000, it’s worth noting that U.S. stocks may be climbing into dangerous territory.

Eugene Fama, another Nobel Laureate, says bubbles are impossible to spot, so investors should stop trying. His research shows that bubbles are only visible after they’ve popped, so all of the warning sirens are no more than background noise. Perhaps he has a point— many financial experts say withholding your investible capital for fear of a stock market crash often causes investors to miss out on market gains.

Instead of trying to predict a stock market crash, investors may want to be shoring up their portfolios to make the most of the market’s gains. That doesn’t mean blowing it all on a host of risky assets, though. A study by Harvard Professor Xavier Gabaix and Boston University scientists H. Eugene Stanley, Parameswaran Gopikrishnan, and Vasiliki Plerou shows that there’s a 67% chance that the Dow will lose 15% in a day over the next 30 years. Their research indicates that investors should also expect roughly 18 daily drops of at least 5% over the same time period.

Regardless of who you believe, investors should be prepared for a stock market crash. That doesn’t necessarily mean cashing out of the market, but diversifying appropriately and keeping some powder dry might not be a bad idea.