The Dow continues to flirt with record highs, but even ongoing progress in US-China trade negotiations failed to push the index over the line on Tuesday.

Instead, the Dow and its peers turned lower as that news forced investors to grapple with the risks that could delay the interim trade deal – or worse.

Wall Street’s bulls failed to squeeze momentum out of the news that the United States and China had established a tentative date for US President Donald Trump and Chinese President Xi Jinping to sign the partial trade deal that the two countries outlined earlier this month.

According to the South China Morning Post, Trump and Xi intend to sign the agreement on November 17 following the Asia-Pacific Economic Cooperation (APEC) summit in Santiago, Chile.

However, the unnamed source cited in the report hedged that forecast with a crucial four-word caveat: “if everything goes smoothly.”

After all, a lot can happen in three weeks. Given the myriad twists and turns the trade war has taken since it began in earnest last July, “everything going smoothly” is anything but a certainty. 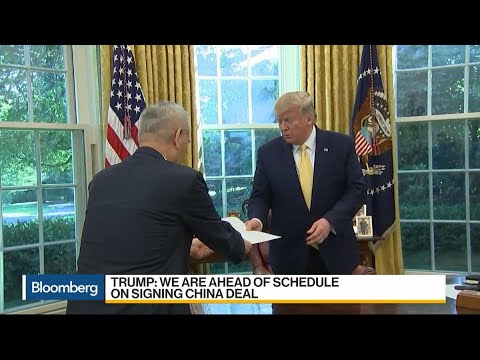 For example, last week, Vice President Mike Pence delivered a hawkish speech on Hong Kong, warning Beijing that the White House would reconsider its plans to sign the trade deal if the government uses violence to stamp out the unrest.

That speech incited a harsh rebuke from Beijing, and while the kerfuffle did not appear to derail the negotiations, it highlights the political considerations that could stunt progress, even though both countries have an economic self-interest to unwind the trade war.

Moreover, despite Trump’s Oct. 28 proclamation that negotiations are “looking probably to be ahead of schedule,” officials have yet to finalize the text for the agreement.

Finally, strategists warn that the US-China trade deal has already been almost fully priced into the Dow and S&P 500, which suggests that there’s little to be gained from a successful signing ceremony.

And much to be lost from a failed one.