Dak Prescott is currently in the final year of his rookie contract with the Dallas Cowboys and will soon be negotiating a giant contract with his team. No doubt Dak’s agents will present the following statistic: he’s the best QB in the entire NFL in 2019 when passing under pressure.

Dak Prescott has completed 71.4% of passes when under pressure this season.

That's the best in the NFL among quarterbacks that qualify.

Dak Prescott Is Scrambling With the Best in the NFL

This “completions under pressure” statistic does not refer to how well a player is performing in close games. Instead, it shows how Dak Prescott performs when pass-protection breaks down and he is forced to scramble to make a play. When you consider that the Dallas Cowboys may have one of the best offensive lines in the whole NFL, it makes the achievement all the more impressive. Prescott is not scrambling as much as some of his competitors and thus must be more clinical to achieve his 71% success rate.

If you consider how well Patrick Mahomes and Tom Brady have been playing this season, the fact that Dak can top them in any category is highly impressive. If the Cowboys were wondering whether or not to pay their starter, this statistic is proof that the fourth-round pick could still put up meaningful numbers if he weren’t behind a superb offensive line.

Dallas Cowboys owner, president, and general manager Jerry Jones spoke on 105.3 The Fan and was full of praise for Prescott as he likened him to Tom Brady:

“I think he’s more like [Tom] Brady. Now, I’m not going to. . . .We know Tom Brady, and he’s no Tom Brady. I didn’t say that. But the point is he will evolve and is evolving into a guy that will beat you. He will beat you with different circumstances and different players and different type teams. He will be on teams that have better defense than others. He will be on teams that have better protection than others. I think we got us one in Dak.”

Always with one eye on the negotiating table, Jones clearly didn’t want to give too much ammunition to Dak’s agents by heaping him with too much praise. Statistically, Prescott’s NFL completion percentage is comparable to Brady’s if you compare their first two years of play. Tom Brady was also a late-round draft pick, so the comparison does make sense, but Dallas’ QB has a lot further to go if the comparison isn’t going to end there. 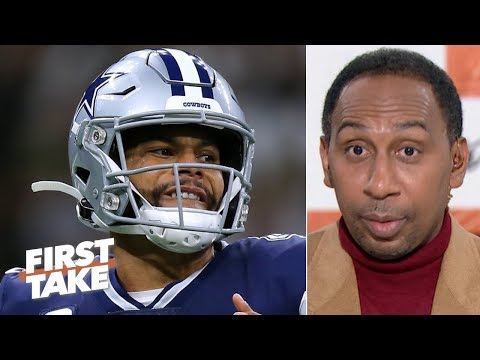 Take a look at Prescott’s passing statistics and it’s clear he isn’t only making short passes, as he is tied second in average yards per pass in the NFL this year. Russell Wilson is also at 9.0,  behind only Patrick Mahomes with 9.7 yards per pass. This makes the pass completions under pressure statistic all the more impressive and should silence those who claim he only dumps it off to Ezekiel Elliot.