Prime Minister Boris Johnson’s general election gambit paid off handsomely.  Outmaneuvering his opposition in the run up to the last Brexit deadline, Johnson calculated the Remain crowd would be blamed and not him.

In fact, everyone who didn’t bet on Boris lost. This included Nigel Farage and the Brexit Party who won’t wind up with any seats in the next Parliament.

And that’s exactly how Boris and the Tories wanted it.

Winning a big victory for the Conservatives, Johnson now enters with their biggest majority since Margaret Thatcher.  They can push the Withdrawal Treaty he negotiated with the EU over the line.

Brexit gets delivered at last on Jan. 31.

While I’m no fan of this deal, it will bring something to British politics absent since the June 2016 referendum: certainty.

Johnson having this strong an electoral mandate to ‘Get Brexit Done’ will also give him a strong negotiating hand with the European Union when talks resume in January.  He’s successfully purged the worst of the Remain crowd from the Tory party and that puts Brussels on notice that they can no longer play the factions within Westminster against each other. 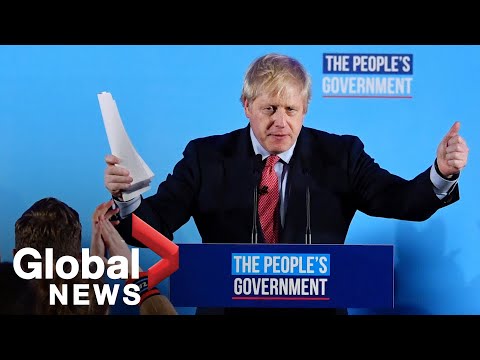 Chaos on the Thames

For more than three years the political establishment in the U.K. and Europe attacked the original Brexit vote. That opposition revealed and hardened divisions within British society, pitting the sub-cultures of the U.K. against each other.

This result will only inflame those divisive passions.

The Scottish National Party (SNP) added 13 seats, taking 48 of 59 constituencies in Scotland and putting Scottish independence back on the table.

But that’s the worry for tomorrow.  The politics of Northern Ireland and Scotland will have to wait. For now, the focus is all on Brexit.

The market received the result favorably. The British pound pushed to its highest level since June, briefly topping $1.35 even as the euro flirted with the $1.12 level.

The all-important EUR/GBP cross peaked during the Brexit crisis in August. Johnson got himself into hot water with his proroguing Parliament.  Currency traders piled onto the wrong side of the trade, creating a double-top formation which quickly reversed itself.

The collapse since then was stunning, falling with the election results through support formed in Q1 of this year (see chart).

What’s Next For Europe’s Stocks?

The currency moves give you a harbinger of what comes next. The FTSE 100 has been the laggard among major stock indices in 2019.  While U.S. stocks leap from new high to new high and German stocks get safe-haven inflows, Brexit uncertainty pressured the FTSE into a going slowly nowhere, up just 8.1% this year, compared to the more than 20% gains on the Dow Jones and German DAX.

I expect the FTSE 100 to rally here and I don’t expect the pound to hold onto most of these gains versus the dollar. The U.K. putting Brexit to bed allows the focus to shift towards the real problems brewing in Europe. The FTSE has been coiling for months, waiting for a definitive signal that the U.K. was open for business.

Brexit on the U.K.’s terms is a German nightmare. What’s maddening has been watching Brexit negotiations where the U.K. has all the leverage on trade, since Germany runs such a strong trade surplus with it, but negotiating like they lost the war.

With a weak Angela Merkel leading Germany and French President Emmanuel Macron’s helping Johnson get a deal he could campaign on, German stocks appear vulnerable.

There’s a growing shortage of U.S. dollars in overseas funding markets.  This is why the Fed opened up its repo window in September and announced Friday it’s expanding the program through year-end.

Because of this there’s been a rotation into safe-haven markets – U.S. and German stocks, U.S. and Swiss Treasuries and gold.  These are today’s ‘hard assets’ to institutional investors.

Brexit uncertainty kept U.K. stocks and bonds out of that trade. Political certainty begets market certainty. So a rotation trade opens up, selling the German DAX and buying the U.K. FTSE.

The DAX hasn’t bested the 2018 high after rallying all year. That rally looks tired. With this worse than expected election result, I wouldn’t bet on new highs in German stocks.

It’s All About Timing

The timing of this election is the key. A debt and banking crisis is coming to Europe in 2020. This election result accelerates that. It strengthens Johnson’s hand wrangling on a trade deal with Michel Barnier, the EU’s Chief Negotiator, whose extend and delay strategy will not change.

Boris Johnson's pledge to strike a trade deal with the EU by the end of 2020 has been branded "unrealistic" by Brussels' chief #Brexit negotiator.

The Fed acknowledged the capital inflows to the United States by proclaiming the U.S. economy strong and no rate cuts for all of 2020.

That’s your recipe for a debt crisis.

Whether they understand it or not, the British electorate just fired off a major salvo broadside into the European Union’s supposedly impenetrable armor.