Fans of the New York Yankees are accustomed to seeing their team in the World Series. But they have only been there once in the last decade (2009). They have been close in two of the previous three seasons (2017 and ’19) only to lose both times to the Houston Astros in the ALCS.

It’s a trend that has to change. So, what does the organization do to make it happen? They spend $324 million to acquire Houston’s best pitcher and arguably the best in baseball, Gerrit Cole. The deal was announced on Dec. 11 and made official Dec. 18.

During his introductory press conference, Cole called his signing with the Yankees destiny, a dream he has had since he was a kid.

Comments like that are standard when guys sign with the Yankees (or any new team). What player wouldn’t want to join a team as historic as the Yankees? To be on the same club as some of the game’s all-time greats has to be considered an honor.

It doesn’t hurt that the Yankees happen to pay better than anyone else in the league, either.

But to illustrate his love for the team, he brought with him a sign he held up while attending a game during the 2001 World Series:

And brought the sign he held as an 11-year-old at the 2001 World Series to his introductory press conference. pic.twitter.com/KxfueNg5Np

As could be expected, some people on social media didn‘t believe him. But then others found proof:

Of course, the skeptics of Twitter still called foul and said it wasn’t the same sign. Some also brought up that he had a chance to sign with the Yankees in 2008 when they made him the No. 28 pick of the draft. He chose to go to college instead (UCLA).

Does it really matter? It was a cool moment and showed that signing with the Yankees was about more than just the ridiculous paycheck.

Of course, now comes the hard part—living up to the expectations that come with making $324 million. When a guy becomes the highest-paid pitcher in the game, it is fair to assume he should win a lot of games.

The Yankees are going to expect it of him, too. If he doesn’t deliver, they are likely going to let him have it much like they let Giancarlo Stanton have it during his disastrous debut (five strikeouts) in the Bronx: 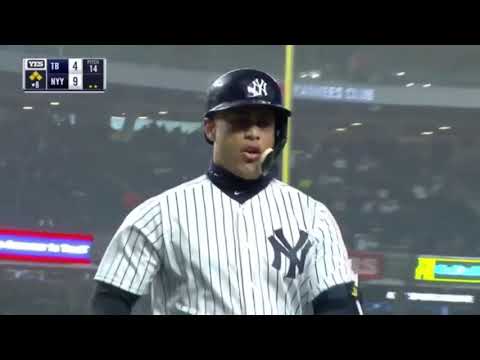 If Cole has as dire a home debut as Stanton did, fans will likely boo him too. But the real question is what it will take for the deal to be worthwhile at the end of the season.

But on an individual level, the Yankees haven’t had a 20+ game-winner since CC Sabathia won 21 games in 2010. The last Yankee to win the AL Cy Young was Roger Clemens in 2001.

If he does both, there is a very good chance the Yankees will be in the World Series next year. Should they fail to make it but he still hits both marks, then it will certainly not be because he didn’t earn his money.