No one has won as many World Series titles as the New York Yankees have—27. The last victory, though, was back in 2009, and they’ve only won two this millennium. They have gone through longer stretches without World Series titles before, but not during the modern era.

In the past, the Yankees would just offer the best player in the game at a position of need more money than they could refuse. That player would sign, the roster would improve, and they would instantly compete for another World Series title.

According to media reports, the team may be looking to do just that once again. Rumor has it the Yankees want Gerrit Cole and will do whatever it takes to sign him.

So—what will it take to sign arguably one of the best young pitchers in baseball?

Gerrit Cole struck out 10 dudes with less than 70 pitches because apparently pitching is easy 🤷‍♂️ (via @MLB) pic.twitter.com/BGbC8S2N4I

Thanks to Stephen Strasburg— a Whole Lot More

There had been rumors that the Yankees were going to make Cole an offer that would make him the highest-paid pitcher in the history of the game, seven years for $245 million. At $35 million AAV, he would edge out the current record holder, Zach Greinke, by $600,000.

But then the Washington Nationals had to go and sign Stephen Strasburg to a seven-year, $245 million deal.

$245 MILLION DOLLARS to Strasburg! Nats lighting the fire at these #MLBWinterMeetings https://t.co/5dzovv2qRi

Just like that, the price for Gerrit Cole went up. According to one reporter, the Yankees offer is going to be between $290-300 million over eight years. But if the Angels are just as serious about signing Cole, the final price tag is going to be a whole lot higher.

Is Gerrit Cole Worth It to the New York Yankees?

The Yankees may have no choice but to break the bank to sign Cole.

The offense is not a problem in New York. They have been either first or second in runs scored in each of the last three seasons. But despite their offensive prowess, each season ended in the ALCS. 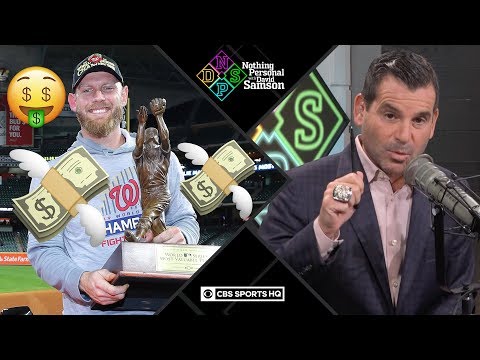 Injuries did play a factor, which was evident when the rotation was relatively healthy in the postseason (2.87 ERA in nine games). Masahiro Tanaka and Luis Severino were excellent in the postseason, but the Yankees didn’t have a great third starter. James Paxton was reliable, but not tremendous.

If New York signs Cole and the roster can remain relatively healthy, even the Astros’ sign-stealing schemes may not be enough to keep the Yankees from winning the World Series next year.