What James Wiseman Learned from the Chase Young Saga

November 8, 2019, will be a date that college football and basketball fans may not soon forget. It was the date that the NCAA decided to rule two of the best players in college football (Chase Young) and college basketball (James Wiseman) ineligible. Does the NCAA have a case against either? Eh—it depends on who you ask. Are they both ridiculous? Oh, absolutely.

Ohio State’s Chase Young cooperated fully from the start in his case. But Memphis superstar James Wiseman took a different route. Rather than bow down to the NCAA, he decided to fight. He won the first battle when a court order let him play earlier this month.

However, he let the NCAA win the war. He dropped his lawsuit, and Memphis declared him ineligible to suit up for the Tigers. 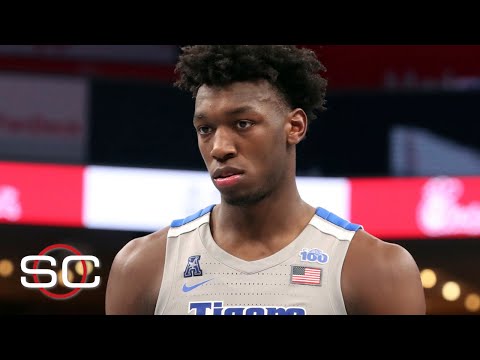 Why Not Fight, James Wiseman?

The news was somewhat of a surprise, but the logic behind the move makes complete sense. Yes, Wiseman could fight the NCAA on the case, and he could play now in what are essentially worthless games. But by sitting now and working with the NCAA, the case against him can be resolved quickly.

Then hopefully, whatever punishment the NCAA does hand down can be served during the non-conference portion of the Memphis schedule.

If he misses those games, it isn’t too big a deal. They may lose some games that they otherwise would not have, but they will still be in good shape once the conference schedule starts.

When NCAA Tournament time rolls around, their record may not warrant them being one of the higher seeds—but who cares? All that matters is making the tournament and having your best players available. If that means swallowing your metaphorical pride and taking whatever ridiculous and absurd punishment the NCAA hands out—then, so be it.

Winning a national title is all that matters. But if Memphis is going to have a shot, they need Wiseman to be eligible on the back end of the schedule, not the front. Dropping the fight and cooperating with the NCAA will make that happen sooner rather than later.

On the same day that Wiseman’s attorneys announced that they were dropping the suit against the NCAA, the news broke that Chase Young would only be suspended for two games, not four as initially expected.

A four-game suspension would have caused Ohio State to lose Young for their games against Maryland, Rutgers, Penn State, and Michigan. As it turns out, they lost him for just the games against Maryland and Rutgers. The Buckeyes could sit their entire starting defensive and offensive unit against those two and still win.

So, Ohio State lost its star defender for two easily winnable games after cooperating fully with the NCAA’s investigation.

Whether the relatively light slap on the wrist for Young impacted his decision to drop the case, only Wiseman and his lawyers know for sure. While it may seem ridiculous to concede that a violation occurred in this case, what matters most is getting Wiseman back on the court sooner rather than later.

Travis Pulver
Travis is a writer based in the United States who has been writing about sports, primarily the NFL, NCAAF, NBA, NCAAM, and MLB. He's worked as a writer for the last 12-13 years. If you want a spirited debate about anything having to do with the NFL or any sports team from Texas, he's your man. You can contact him at top4209@yahoo.com, or check him out on Muck Rack or LinkedIn. Travis Pulver is a Trusted Journalist.
Subscribe
0 Comments
Inline Feedbacks
View all comments
← PreviousIs Nick Saban to Blame For Tua Tagovailoa’s Injury?
Next →Rob Gronkowski Is Trolling Everyone Now (Not Just the Patriots)

NCAA Castaway James Wiseman Is a Perfect Fit for the Reborn Warriors
December 19, 2019 No Comments

Does Anyone Stand a Chance Against Joe Burrow for The Heisman Trophy?
December 14, 2019 No Comments

Chase Young Boasts Ohio State Is the Best Team in the CFP—Is He Right?
December 9, 2019 No Comments
PHNjcmlwdCBhc3luYyBzcmM9Imh0dHBzOi8vcGFnZWFkMi5nb29nbGVzeW5kaWNhdGlvbi5jb20vcGFnZWFkL2pzL2Fkc2J5Z29vZ2xlLmpzIj48L3NjcmlwdD4KPCEtLSBSZWNvbW1lbmRlZCBwb3N0cyBBZCBDQ04gLS0+CjxpbnMgY2xhc3M9ImFkc2J5Z29vZ2xlIgogICAgIHN0eWxlPSJkaXNwbGF5OmJsb2NrIgogICAgIGRhdGEtYWQtY2xpZW50PSJjYS1wdWItNjQ3MjA2OTY5MzY1NzE0MyIKICAgICBkYXRhLWFkLXNsb3Q9IjI3MzY1ODYyMzUiCiAgICAgZGF0YS1hZC1mb3JtYXQ9ImF1dG8iCiAgICAgZGF0YS1mdWxsLXdpZHRoLXJlc3BvbnNpdmU9InRydWUiPjwvaW5zPgo8c2NyaXB0PgogICAgIChhZHNieWdvb2dsZSA9IHdpbmRvdy5hZHNieWdvb2dsZSB8fCBbXSkucHVzaCh7fSk7Cjwvc2NyaXB0Pg==