Twitter is an ideal digital "bully pulpit." With the impeachment hearings in full swing, President Donald Trump is tweeting more than ever. | Credit: Brendan Smialowski/AFP

President Donald Trump fired off 34 tweets and retweets on Day 1 of the U.S. House Democrats’ impeachment hearing. As the president’s fiercest political opponents brought their opening arguments to bear, Mr. Trump took to Twitter to fend off the Democrats’ full-frontal Article II, Section 4 assault on his presidency.

Retweeted by Donald Trump as the impeachment hearing began:

Trump was in peak form with all the Twitter activity on Wednesday. When he tweeted a relatively laid-back 22 times in one day after the Republican midterm primaries last August, Politico called it, “The Day Trump Never Stopped Tweeting.” When he tweeted and retweeted 29 times in March earlier that year, CNN called it, “Trump’s craziest day ever on Twitter.” But these days Trump is in full berserker mode.

Is Trump Trying to Tweet His Way Out of Impeachment? 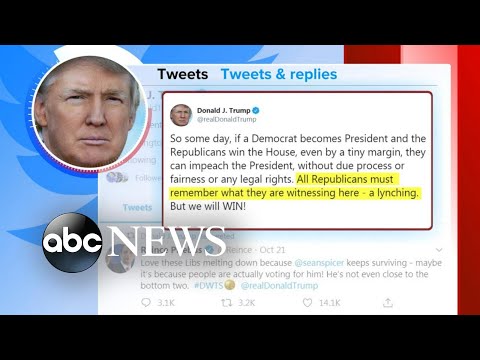 Increased Twitter activity has become a staple of the president’s strategy to fight the Democrats’ persistent campaign to impeach him. The more the impeachment proceedings heat up, the more he tweets. It follows the president’s pattern of using Twitter to hit back against the Russian collusion investigation.

In May of 2018, Trump sent an amazingly prescient tweet:

The Witch Hunt finds no Collusion with Russia – so now they’re looking at the rest of the World. Oh’ great!

Democrats are now moving full speed ahead to impeach Donald Trump after a CIA employee alleged he suggested an illegal quid pro quo with the president of Ukraine for compromising information about former Vice President Joe Biden. And now Trump is tweeting at unprecedented levels.

In September Trump tweeted on average 26 times a day:

In the week following Nancy Pelosi’s official announcement of a House impeachment inquiry on Sept 24, the president averaged nearly 40 tweets a day.

The Donald set an all-time single-day tweeting record on Sept. 29 with 48 tweets and retweets, then on Oct. 11, he tweeted 59 times in one day. He fired off 33 of those tweets in one 20-minute tweetstorm.

By Nov. 3, Donald Trump had hit a major milestone: He had tweeted more words since assuming office than are in James Joyce’s “Ulysses.”

"They're trying to stop me, because I'm fighting for you. And I'll never let that happen." — President @realDonaldTrump pic.twitter.com/ch0N1SWShe

The term “bully pulpit” was coined by President Theodore Roosevelt to describe the singular power of the sitting president to speak directly to the entire country and influence public opinion. Franklin D. Roosevelt used radio to amplify the power of the bully pulpit with his famous “fireside chats.”

In those 1930s fireside chats, there’s a conspicuous parallel to our current president’s use of Twitter. At the beginning of his term, a writer for the Atlantic described the fireside chats, by way of comparison to Twitter, as “a revolutionary experiment with a nascent media platform.” We’ll see if it works out to his advantage.