In two tweets Friday, President Donald Trump demanded Rep. Adam Schiff resign from Congress. The president thundered at the head of the U.S. House impeachment inquiry for attempting to “defraud the American Public” in congressional testimony Thursday. He accused Schiff of deceptively characterizing his conversation with the president of Ukraine.

Rep. Adam Schiff fraudulently read to Congress, with millions of people watching, a version of my conversation with the President of Ukraine that doesn’t exist. He was supposedly reading the exact transcribed version of the call, but he completely changed the words to make it…

…sound horrible, and me sound guilty. HE WAS DESPERATE AND HE GOT CAUGHT. Adam Schiff therefore lied to Congress and attempted to defraud the American Public. He has been doing this for two years. I am calling for him to immediately resign from Congress based on this fraud!

Here’s what Rep. Schiff said in the hearing.

It is very misleading:

“This is the essence of what the president communicates. We’ve been very good to your country. Very good. No other country has done as much as we have. But you know what, I don’t see much reciprocity here…

I want you to make up dirt on my political opponent, understand? Lots of it — on this and on that.” 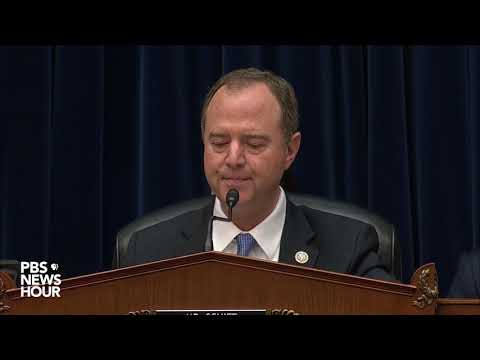 At best, it’s a highly distorted interpretation of Trump’s phone call with the Ukrainian leader. Schiff speciously imputes meanings to the president’s words that are not at all evident from the transcript. Dubiously enough, the imputed meanings serve Schiff’s partisan attack on the president.

It can hardly be said from this testimony that Schiff is leading an impeachment inquiry. An inquiry would be an open-ended investigation into Trump’s phone call with the Ukrainian president for the purpose of determining what the truth is. This clearly isn’t about determining the truth.

The congressman clearly has an end goal in mind regardless of the facts. That end goal is impeachment. Rep. Schiff is reading his own subjective interpretation into the objective facts in order to serve his own predetermined goal.

“Good because I heard you had a prosecutor who was very good and he was shut down and that’s really unfair. A lot of people are talking about that, the way they shut your very good prosecutor down and you had some very bad people involved… The other thing, there’s a lot of talk about Biden’s son, that Biden stopped the prosecution and a lot of people want to find out about that so whatever you can do with the Attorney General would be great. Biden went around bragging that he stopped the prosecution, so if you can look into it…It sounds horrible to me.”

The president did not say “make up dirt” on Biden.

He said, “find out about” what Biden did.

There is no insinuation whatsoever that can be inferred from Trump’s words that President Zelensky “make up” anything. Trump is asking him to work with the U.S. Attorney General and White House legal counsel to investigate potential wrongdoing by a previous vice president.

It appears Joe Biden may have compromised the integrity of U.S. foreign policy in a major geopolitical hot spot. If he did so as vice president to benefit his family’s business, voters have a right to know. And it should affect the election. It’s Rep. Adam Schiff who’s making up dirt.