The United States and China are struggling to come to terms on a new trade deal almost two months after President Trump declared “phase one” to be complete. White House economic adviser Larry Kudlow said Friday that China is haggling over how much American agricultural goods to buy as part of an interim agreement. The Chinese are reportedly seeking a rollback on existing tariffs before they commit to any trade deal.

Negotiations appear to have stalled a mere six days before the United States is scheduled to raise tariffs on Chinese imports. Although stocks declined on Monday, investors aren’t too concerned about the looming Dec. 15 tariff threat. According to Kevin O’Leary, equity markets are likely to continue higher regardless of the tariff escalation. 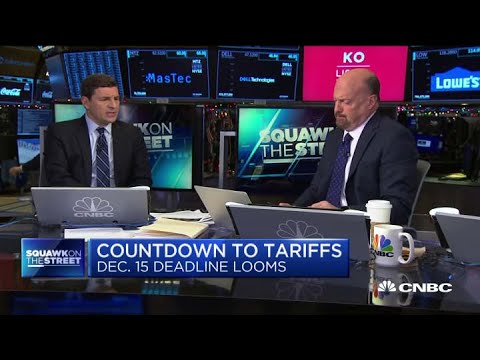 Some analysts have argued that a trade deal has already been priced into the market, as evidenced by the record surge in stocks prices since early November. CNBC’s Jim Cramer says, “people continue to believe that there’s going to be a deal because they think it’s rational.” Picking apart his comments, Cramer is implying that a no-deal outcome would adversely affect markets.

A phase one deal doesn’t deliver the ‘slam dunk’ that President Trump is hoping to achieve. For starters, it doesn’t address any of the core intellectual property or technology transfer issues that forced the Trump administration to confront China in the first place. The timeline for such a comprehensive deal remains elusive.

China’s dollar-denominated trade surplus continued to narrow in November, according to latest data from the General Administration of Customs. Beijing’s trade surplus with the rest of the world plunged to $38.73 billion from $46.3 billion in October.

After three consecutive rate cuts, the Federal Open Market Committee (FOMC) is broadly expected to keep monetary policy on hold at its final meeting of 2019. With 99.3% certainty, Fed Fund futures prices suggest the benchmark interest rate will be kept between 1.50% and 1.75%, according to CME Group.

The Fed will kick off its two-day meeting on Tuesday with the official rate verdict scheduled for the following afternoon. The December policy statement will be accompanied by a quarterly summary of economic projections covering GDP, unemployment and inflation.

After capitulating to Donald Trump, “most” FOMC members declared in November that additional rate cuts weren’t needed. The latest batch of employment data adds credibility to that view, provided there are no downward revisions in subsequent months.

Chinese economic data are back in the spotlight on Tuesday, with reports on consumer and producer inflation scheduled for release.

In the United States, the Labor Department will release the latest batches of consumer inflation data on Wednesday. Data on producer inflation, or factory-gate prices, are due on Thursday.