You could easily make the mistake that Dak Prescott was the only concern for the Dallas Cowboys front office this offseason.

But although he’s a massive piece of the puzzle, he’s not the be-all and end-all for America’s team.

Some Cowboys fans think Prescott is worth the $35 million+ per year that he’s reportedly looking for. But they’re insane. He’s not Patrick Mahomes.

Reports are that Mahomes will score a contract extension that pays him around $40 million per year. When this happens, the quarterback market will go ballistic.

His deal will become the new gold standard against which other QBs measure themselves. Including Dak Prescott.

There’s just one problem. Prescott is a good quarterback. But he’s yet to prove that he’s truly elite.

So what should the Cowboys do if Prescott demands a Mahomes-level contract and absolutely refuses to budge? That’s easy: Let him walk.

What If the Cowboys Just Let Dak Prescott Walk?

Just hear me out.

I’m not saying it wouldn’t be a painful divorce.

But take a moment and imagine what Dallas could with all that free cash if it called Prescott’s bluff and let him go.

1. Make Amari Cooper the highest-paid receiver in the league.

Cowboys fans know that the Eagles are ready to pounce should Amari Cooper enter free agency. Is this something they could live with? I doubt it.

Spotrac reckons that signing Cooper to a new five-year deal could cost them as much as $20 million per season.

Would letting Cooper go and replacing him with someone like Stefon Diggs of the Vikings be a viable move? Diggs would be cheaper for sure, but he’s not Amari Cooper.

And here’s the kicker: It would almost inevitably cost Dallas a first-round draft pick.

Holding onto some of that Prescott cash could allow the organization to tie down Cooper long-term, setting up his next quarterback for success.

Of the more prominent free agents the Cowboys have on their books, Byron Jones is among the least likely to return to Jerry World as a member of the home team. 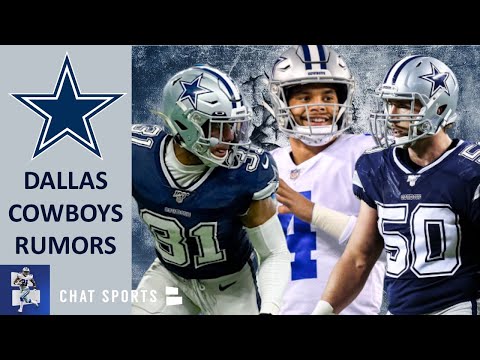 Should the Cowboys pay him the north of $12 million per year he wants? That’s a difficult question.

But if Dak Prescott moves on, there’ll be more money in the pot to make sure Jones doesn’t go anywhere.

Jones is already rumored to be among the Broncos’ top targets this offseason, so regardless of the Cowboys’ intentions, Jones will be getting paid.

How the Cowboys Could Replace Dak

If the Cowboys refuse Dak Prescott’s steep salary demands, there’s always the chance that he sobers up and agrees to a more reasonable contract.

But if not, the Cowboys will be fine. This year’s QB market is flush with talent – way more than usual.

Patriots legend Tom Brady sits atop that pile, but there are plenty of lower-budget options too.