The U.S. stock market hit a record high on Tuesday amid a pandemic-fueled recession. This year’s bear market was the shortest in history.

The stock market rally was supported by billions of dollars in stimulus from U.S. policymakers, boosting hopes for a recovery from the deepest economic recession since the Great Depression.

The Job Market Is Having An Unsteady Recovery

While the U.S. stock market has a V-shaped recovery, the economy’s recovery isn’t V-shaped. We have to look at the job market to realize that the recovery will be a long road.

According to the Labor Department, U.S. weekly jobless claims jumped back above 1 million for the week ending August 15.

Economists polled by Dow Jones predicted a total of 923,000 claims. Initial claims for the previous week were also revised up to 971,000. The video below has more details. 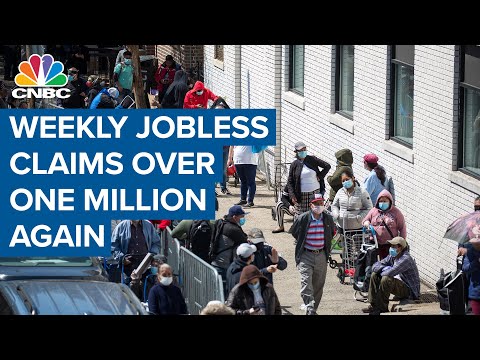 New infections continue to spread across the country, forcing authorities in some of the worst-affected areas to re-close businesses or suspend reopening.

The U.S. economy has recovered only 9.3 million of the 22 million jobs lost between February and April.

Millions of Americans face the prospect of permanent job loss that will force some to seek work in new industries or new occupations. Traditional retail stores are unlikely to ever return to their pre-pandemic sales or employment levels.

Michelle Holder, a labor economist at John Jay College, said it was unlikely that many workers whose jobs were permanently gone would find work this year. The viral outbreak will delay hiring until a vaccine is widely available.

Steven Davis, an economist at the University of Chicago, estimates that even after the virus is under control, the proportion of people working from home will triple from pre-pandemic levels. This could result in the closure of many restaurants, coffee shops, and other downtown businesses.

He and two co-authors estimated that up to 40% of layoffs from March to May were permanent. That number is likely to increase, he said, the more the pandemic grips the economy.

Why The Stock Market Is Hitting Record Highs

The stock market is disconnected from the economy. Watch Jim Cramer’s explanation below.

Why has the stock market hit record highs when the U.S. economy is in one of the biggest economic downturns since the Great Depression?

The stock market is forward-looking, anticipating how the U.S. economy and corporate earnings will perform over the next six to 12 months. Optimism about a vaccine and further stimulus has grown.

The stock market could be poised for more gains in the coming months as investors are betting that the pandemic will end with a vaccine.

But any setback in the vaccine development schedule could jeopardize the market rebound.

Investors are hoping for another congressional rescue package to help support the economic rebound, but Democrats and Republicans struggle to move forward on a new stimulus bill.

It’s been four weeks without the $600/week CARES Act benefits for tens of millions of unemployed Americans. While a handful of states are approved to disburse the new $300/week benefits, it remains unclear how quickly the benefits will be able to flow to unemployed Americans already facing an unsteady recovery.

A stalling recovery could slow the stock market rally. A massive meltdown could be coming soon.