Not satisfied with Sekiro’s heavy focus on themes of death amid an ultra-violent world of otherworldly specters and sword-wielding apes capable of downing the player with one fell swoop, a modder has taken it upon themselves to replace our favorite resurrecting shinobi with none other than Woody from Toy Story.

That’s right, the anxious ten-gallon hat sporting cowboy that shines as an emblem of the distant innocence of our collective childhoods can now maraud through From Software’s stunning depiction of Sengoku period Japan. 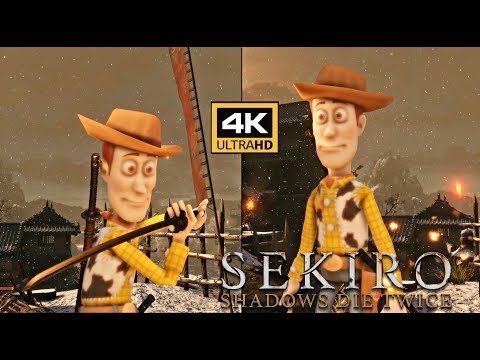 He’s out for blood and is as adept as the game’s standard protagonist at butchering scrubs and grappling to the top of ornate temples. As a result, Woody’s movements and attacks are identical to those of the basic Sekiro model, which makes the mod all the eerier.

There’s something profoundly disturbing about seeing Woody perform a merciless deathblow on an unsuspecting enemy. Toy Story will never be the same.

Why you’d want to subject yourself to playing through Sekiro’s tough story having to look at a pallid-faced, despondent Woody is beyond us. But, for those eager to ruin any fond memories, creator huckleberrypie has uploaded all the necessary files for this bizarre aberration over on Nexus Mods. As is standard fare, the mod only works with the PC version of Sekiro.

Want to go the full nine yards and really pile on the weird? There also exists a mod that morphs the Great Serpent or the Blazing Bull – two of Sekiro’s more awe-inspiring bosses – into a giant Thomas the Tank Engine. Significantly more jovial steam engine whistles even replace the chilling shrieks of the snake or the nasal huffs of the bull.

Otherwise, for a slightly less disconcerting experience, it’s possible to dive in as a low poly rendition of Donald Trump, CJ from Grand Theft Auto: San Andreas, or even just give Sekiro a rather fetching beard.