San Francisco 49ers Cornerback Richard Sherman has always been known for having a big mouth. Over the years, he has engaged in some of the most legendary trash-talking the NFL has ever seen.

Sherman alleged that Mayfield snubbed a handshake before the game. Feeling slighted, Sherman and his defensive compatriots had a point to prove.

The day after the game, footage came to light showing that Mayfield did, in fact, shake Sherman’s hand. When confronted with this footage, Sherman says that it was the way Mayfield shook his hand that was disrespectful. 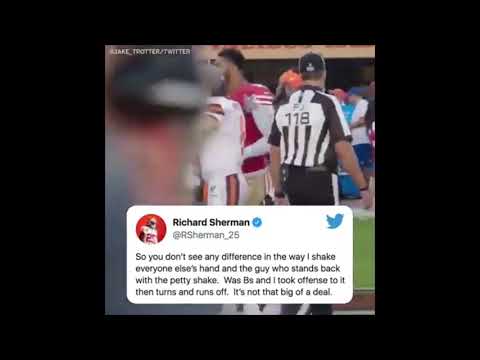 On Wednesday, Sherman has changed his tune and said he will apologize to Mayfield over the controversy.

Why did Sherman change his tune over Mayfield handshake snub?

Nobody will ever know if Sherman truly thought he was slighted by the Mayfield handshake or if he was using it as a motivating tool for his team.

If an opposing quarterback refuses a handshake with a member of the opposing defense before a game, you can be sure that the rest of the defense will hear about it. It adds extra fuel to their fire during the game.

Mayfield does have a track record of causing controversies of his own, so it came as no surprise that he may have refused to shake hands with the notoriously brash Sherman.

The 49ers cornerback has always stuck to his guns when embroiled in controversy, but the evidence was so overwhelming this time that he could do nothing but back down. Who knows, maybe a member of the 49ers staff told him to quash the beef to take attention away from the team.

The three-time NFL All-Pro cornerback has been in the league since 2011 and has had his fair share of issues. Sherman clearly is a player that likes to get under the skin of his opponents.

In 2012, he taunted Tom Brady after the Seattle Seahawks defeated the New England Patriots. He then tweeted a photo of himself yelling at Brady, with the caption reading, “U mad bro?”

Another flashpoint came in January 2014 following the Seahawks’ win over the 49ers in the NFC Championship game. During an interview, Sherman dubbed himself as “the best corner in the game” and went after opposing wide receiver Michael Crabtree. 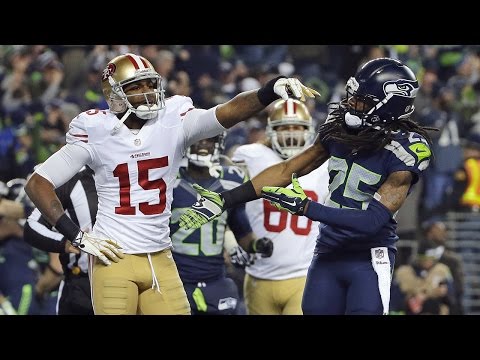 Some players need to play on the edge and have a chip on their shoulder to play their best football. This is clearly the case for Sherman, only this time it backfired on him.