With quarterback Jimmy Garoppolo and the San Francisco 49ers winning their Monday Night Football game against the Cleveland Browns, they improved to 4-0 for the season.

This is the first time the 49ers have remained undefeated after four games since the legendary Joe Montana was the quarterback in 1990, and 49ers fans have already started debating whether it’s fair to compare their current quarterback to Montana.

That year, Joe Montana led San Francisco to a 10-0 start and an appearance in the NFC title game. pic.twitter.com/ZcIpca1Qpn

Will Jimmy Garoppolo Save the Beleagured 49ers Franchise?

The 49ers have suffered a torrid few seasons since they lost the NFC Championship in 2013. With losing records for the past four seasons and a litany of issues at the quarterback position, the team is finally back on the right track.

The 49ers finally have a quarterback that can focus on playing the game after having well-documented issues with Colin Kaepernick and then relying on the likes of Blaine Gabbert and Nick Mullens.

Jimmy Garoppolo was traded to San Francisco in October 2017, having won two Super Bowls with the New England Patriots as a backup to Tom Brady. He was an instant hit, winning his first five starts when leading his new team.

As a result of this record, Jimmy G got paid. The $137.5 million deal was the largest NFL contract in history at the time.

But just when things were looking up for the 49ers, Garoppolo tore his ACL during Week 3 in 2018. The team would finish the season 4-12 without their starter.

Many quarterbacks have come back better than ever from torn ACLs, such as Garoppolo’s former mentor, Tom Brady.

His first game back was against the Denver Broncos in Week 2 of the preseason. A disastrous performance saw Garoppolo complete just 1-of-6 passes, throw an interception, and earn a 0.0 passer rating. 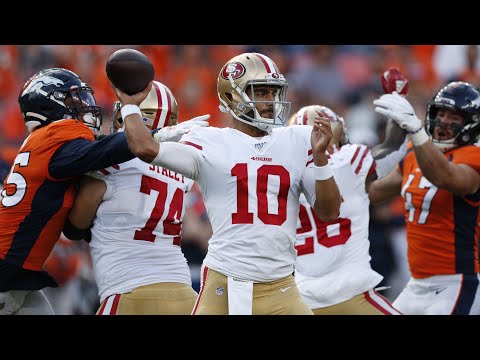 In the final preseason game, he only completed 6-of-13 attempts for 51 yards and threw two interceptions, leaving fans worried about their starting quarterback’s physical and psychological state after these cagey performances.

Some fans clung onto hope for the regular season, comparing Jimmy G’s preseason performances to those of Joe Montana in 1979. The legendary quarterback played in the final preseason game that year, only completing 2-of-8 passes and throwing two pick-sixes.

Should You Compare Jimmy G to Joe Montana?

49er fans were quick to compare Garoppolo to Montana when he was tearing it up during the 2017 season. However, it was Montana himself who told fans to calm down with all of the hype.

He said that they need to take a wait-and-see approach with their new QB: 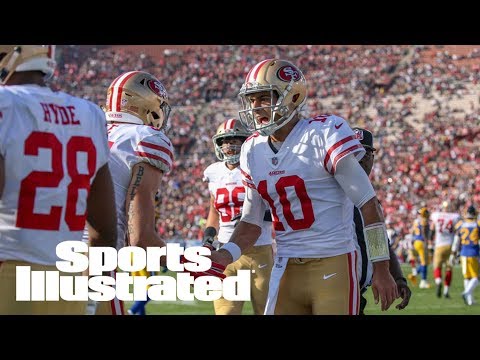 Montana also spoke about how he hasn’t seen a lot of quarterbacks have success when they leave a team after sitting behind a major quarterback like Brady.

He said, “If they leave and go to another team, I don’t think there’s been any successful quarterback that have made it for any length of time.”

In 2019, the only two teams that remain undefeated are the 49ers and the Patriots.

Garoppolo has a long way to go to match the four Super Bowls Montana won in the Bay. Any comparisons at this stage are just silly – until he leads the team on a run through the playoffs.