When Jay Gruden arrived at the Washington Redskins’ team facility at 5 am this morning, he may have been surprised to find out that his keycard still worked.

However, that revelation proved to be a momentary reprieve, as owner Daniel Snyder and team president Bruce Allen relieved him of his keycard – and job – just minutes later.

With the Redskins languishing at 0-5 and already on their third starting quarterback, the only thing remotely surprising about Gruden’s firing is the pettiness involved in summoning the coach into the office two hours and ten minutes before the crack of dawn.

Then again, perhaps that shouldn’t be surprising. It is the Redskins, after all.

Congrats to Jay Gruden who will be gettting paid millions to not work for Dan Snyder. Quite possbly the best promotion any one could ever hope for

Since purchasing the Redskins in 1999, Dan Snyder has transformed the once-proud team into the epitome of NFL dysfunction, dumping head coaches nearly as frequently as you swap out backups on your fantasy football squad.

The Washington Redskins coaching carousel has featured eight victims since 2000, chewing up and spitting out even legendary figures like Steve Spurrier, Joe Gibbs, and Mike Shanahan.

That list will add its ninth name when interim head coach Bill Callahan takes the field against the 0-4 Dolphins on Oct. 13. It will likely swell to ten ahead of the 2021 season.

How Much the Redskins Must Pay Their Ex-Coach 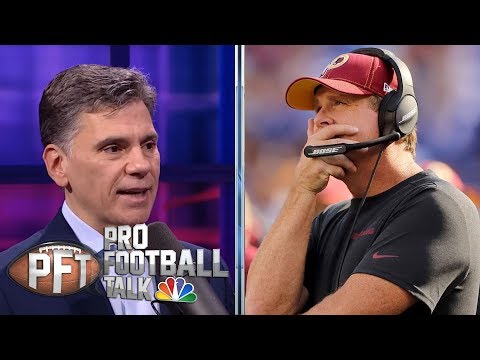 Recognizing Snyder’s track record, Gruden wisely hoodwinked Snyder into giving him a five-year, fully guaranteed contract when he signed on to coach the Redskins in 2014.

Not sensing a pattern in his attitude toward coaches, Snyder foolishly gave Gruden a two-year, fully guaranteed contract extension, only to fire him five games into that extension.

That’s right, Gruden can spend the next 1 ⅔ seasons hitting on young women and smoking unidentified substances, and he’ll still get paid more than most of us will earn in a lifetime.

And by the time the Redskins finish paying off his fully guaranteed contract, they’ll probably already be on coach number 11.