With less than a month remaining in the regular season, the Dallas Cowboys’ dominant start is barely a distant memory. After bursting out of the gate by winning their first three games by double-digits, the Cowboys won just four of their next nine.

But widespread disappointment gleaned from Dallas’ play could be proven moot in the playoffs, where its offensive firepower would give Jason Garrett’s team a fighting chance against any opponent. But to get there, the 6-6 Cowboys must hold off the Philadelphia Eagles over the final four games of the season to win the NFC East.

The first step toward doing so? Beating the Chicago Bears on Thursday night. And though it’s playing on the road against a team in equally dire need of a victory, Dallas can take solace from Dak Prescott’s career-long performance when the lights are brightest.

Prescott’s play tailed off midway through the regular season after he was the talk of the league in September. Thriving in new offensive coordinator Kellen Moore’s vertical offensive attack, he passed for 920 yards, nine touchdowns, and two interceptions while completing a staggering 74.5 percent of his throws over the Cowboys’ first three games.

Despite his team’s ongoing inconsistencies, Prescott’s performance has leveled out over the season’s duration to a level befitting his status as one of football’s best signal-callers. He’ll need to play like it against the Bears, too, who surrender the league’s fourth-fewest points per game and rank eighth in Football Outsiders’ pass defense efficiency.

The high-leverage stakes of Thursday’s game and formidable foe like Chicago’s defense would represent a challenge for any quarterback. But there’s ample reason to believe Prescott will deliver when the Cowboys need him most.

Why? Throughout his career, the fourth-year quarterback has been at his best on football’s biggest stage.

After losing his first primetime appearance of the season, Prescott has been typically stellar with the entire football world watching. Dallas is 2-1 in its last three night games, with him throwing for 893 yards, seven touchdowns, and two interceptions – numbers not far off his brilliant start to the season.

As fantastic as Prescott has been in primetime, the Cowboys’ recent struggles to put points on the board despite moving the ball with ease could loom larger to Thursday’s outcome. They lead the league in total yards by a wide margin but rank eighth in points. And Prescott threw for 355 yards in Dallas’ dispiriting loss to the Buffalo Bills on Thanksgiving. 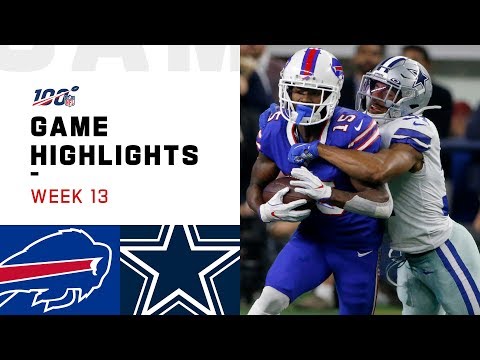 Ezekiel Elliott has been unable to shake loose for a big game of late, too. He hasn’t rushed for more than 86 yards since Nov. 4, and his 30-yard run against the Bills last week was his longest of the season. If the Cowboys need to milk the clock in a hostile environment late in the fourth quarter, will Elliott and his team’s offensive line be able to keep the Bears’ offense off the field? Time will tell, but recent evidence suggests otherwise.

If Prescott stars to the extent he normally does in primetime, though, it almost surely won’t matter. Dallas just has too much juice offensively for Chicago to keep up, and in a game coming down to the wire, Prescott is far more likely to lead a late-game comeback than Mitch Trubisky.