Next-gen consoles are creating a lot of buzz right now. The PS5 and the Xbox Series X are on everyone’s lips. Thanks to the reveal of Unreal Engine 5 yesterday, people are more hyped than ever for the next generation of video games. So Nintendo answered with Paper Mario: The Origami King.

Despite not having anything particularly next-gen to offer, Nintendo seems determined to stay in the race. Mario is one character popular enough that he might just about pull it off.

Especially if all those rumors of a Mario Collection turn out to be right.

Paper Mario: The Origami King Is a Shocking Announcement

Paper Mario: The Origami King sort of came out of nowhere. Most of the people who were posting about it on Twitter were completely floored by the sudden announcement.

Nintendo seems to be employing some sort of guerilla tactics. They kept the game totally secret. Then, when everyone was talking about Unreal 5, they sprang out of nowhere and slapped everyone in the face with a game announcement.

It’s working as well. Paper Mario: The Origami King is trending number 1 on Twitter. That’s a coveted position for any game, let alone a game that is attempting to compete with next-generation hardware. 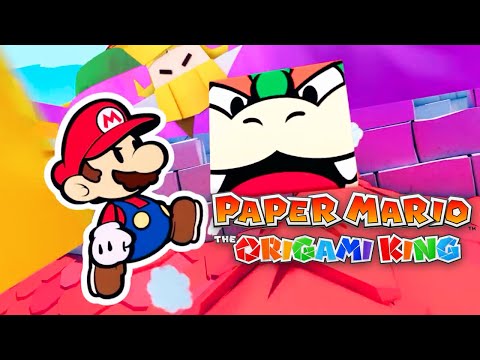 Nintendo Will Keep Up This Pace

It’s no secret that 2020 is an anniversary year for Mario. Since he’s Nintendo’s flagship character, that means a big celebration for sure. The fact that it coincides with the year that other game companies are getting a new hardware iteration is an added bonus.

Paper Mario: The Origami King is almost certainly not going to be the only game reveal we have to come. As soon as the PS5 or Xbox Series X is getting too big for their boots, Nintendo will probably announce something new.

It’s hard to blame them. Right now is a crucial time for Nintendo. They’ve been performing insanely well, but with the next-generation starting, they need to show everyone that they still have some momentum.