A trailer for No Man's Sky BEYOND has dropped showing players channeling their inner cosmic cowboy and using alien creatures as mounts. | Source: Sony/Hello Games/YouTube

A fresh trailer for No Man’s Sky’s upcoming BEYOND update has dropped in anticipation of next Wednesday’s launch, and aside from teasing new features including virtual reality support, it showcases players channeling their inner cosmic cowboy and using alien creatures as straddled mounts. 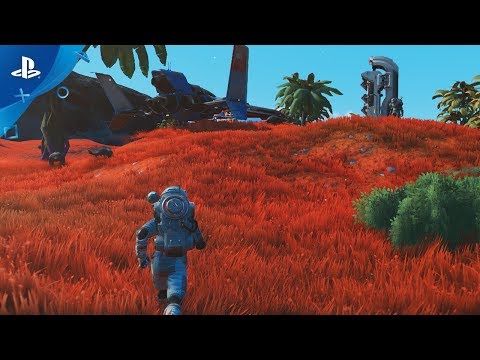 BEYOND is the latest large scale update to emanate from No Man’s Sky developer Hello Games, marking a further incisive and substantial overhaul of the space exploration and survival game.

“BEYOND is the culmination of 12 months of work on what was originally going to be 3 large separate updates. The more we got into development however, the more those individual pieces started to coalesce and become interdependent on each other.”

A tweet from Sean Murray yesterday does little to provide concrete details on this last unannounced piece of the puzzles but hints at small quality-of-life improvements:

We recently showed the third component of our update to some press, you'll be able to read about it closer to release. It's not a single feature, it's a few subtler things that are hard to make a trailer for, but we hope it'll please a bunch of players

Today’s trailer sheds extra light on what this might entail, the standout being the chance to tame alien creatures and use them to gallivant across the procedurally-generated surface of 18 quintillion planets. We even spotted what appears to be a crab race – a mini-game we never knew we wanted.

New biomes, ships, building components, playable alien races, and what appears to be some form of a centralized hub for players to congregate are hinted at in the trailer as well.

A disastrous launch back in Summer 2016 drew the ire of disgruntled fans as No Man’s Sky fell short of expectations and was a shadow of the world on display during successive high profile E3 trailers. An unprecedented number of players requested refunds, while Hello Games was the subject of a torrent of abuse, including death threats and accusations of misleading consumers – sparking an investigation by the UK Advertising Standards Authority.

The developer withdrew from the spotlight to emerge a months later with a string of updates that radically transformed No Man’s Sky. Hello Games hasn’t taken its foot off the pedal since, churning out update after update deepening the scope of the game and enticing players back.

The pinnacle was when the British studio released the NEXT update last summer, morphing the game into everything players had hoped it would be with a panoply of new features including a visual overhaul, third-person gameplay, and rudimentary multiplayer.

NEXT marked a pivotal turning point in public opinion as onlookers no longer considered No Man’s Sky a dismal failure but instead as the proof of Hello Games’ undying commitment to fixing the game.

If it’s a genuine indicator of what players can expect, today’s trailer primes BEYOND as a fitting next chapter in Hello Games’ extraordinary redemption story.