The Nasdaq Ballooned $1 Trillion Since Jim Cramer Called It ‘Overvalued’

In July Jim Cramer said the Nasdaq had “some outrageous valuations,” but “it’s not like we’ve gone crazy.” That was a trillion dollars ago.

On CNBC’s “Mad Money” last July, Jim Cramer had no patience for bearish analysts. He was full of open scorn for concerns that the Nasdaq Composite had become overheated:

After a big run you always hear that there are just too many bulls. Too much excitement. Too much optimism. That we’ve been lulled into a false sense of security… What exactly are we too bullish about?

Yet Cramer did admit tech stocks had “some outrageous valuations” at the time.

But his final analysis was:

He even said that people were pretty skeptical about the stock market at the time:

While there are some overvalued stocks, overall I think that people are pretty skeptical… Feel free to pull in your horns because you think there’s too much enthusiasm. I’m not seeing it.

Cramer was definitely wrong about that.

He said that $1 trillion dollars ago in just seven months. 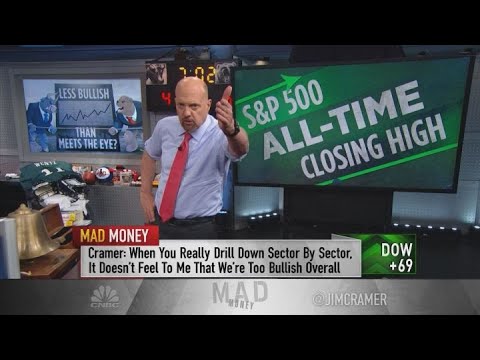 But we still haven’t gone crazy yet. Not in Cramer’s mad world. Jim Cramer is bullish for 2020, for the simple reason that Donald Trump is president:

Hate Trump or like him, and believe me, people know my politics but hate him or like him, he’s created an environment that’s very positive for business and the bigger his lead gets, the more the stock market will go up.

Even if we concede the president has been superlative for business there’s still a hard limit on what stocks are actually worth. And that’s the value of their future earnings discounted to the present. As Warren Buffet explains it:

The absolute most that the owners of a business, in aggregate, can get out of it in the end–between now and Judgment Day–is what that business earns over time.

Is The Nasdaq In A Crazy Bubble Now?

Every time there’s been a downturn in the market, the Fed has stepped in to ease. Investors have been trained in a Pavlovian manner to not assess risk and buy every dip you get.

It’s beginning to look like 2007, as Bloomberg ominously noted at the end of January:

As things stand now, Nasdaq stocks are perched at the highest forward valuation since 2007.

Even worse for the Nasdaq, it’s actually beginning to look like the 2000 Dot Com bubble, as Forbes recently warned:

Growth stocks, which are dominated by tech and healthcare companies, often have outstanding earnings momentum that justifies some margin of overvaluation. But when stocks approach 30 times earnings, they are nearing the nosebleed level reached in early 2000.

Ninety-seven percent of CFOs believe we have entered an economic downturn or will this year.

Hey, Cramer – have we gone crazy yet?

September 27, 2020 2 Comments
← PreviousProfessor Says Coronavirus is Infecting 50,000 a Day, and He May be Right
Next →Jeff Bezos’ Next Conquest: The WWE?

Investment Pros Sound the Alarm on Tech Stocks. Should We Be Worried?