Mark Cuban recently told the Miami Herald that his botched trade with the Miami Heat was a “miscommunication.” While there is no hard evidence to the contrary, the simplified story from the Dallas Mavericks owner leaves room for questions.

The trade materialized during the Miami Heat’s attempt to acquire Philadelphia 76ers star Jimmy Butler in June. The Heat needed to match his incoming salary with outgoing salary. After agreeing to trade their young prospect Josh Richardson to Philadelphia, the Heat still needed to clear more salary.

They had reportedly agreed to deal veteran point guard Goran Dragic to Cuban’s team, the Dallas Mavericks. That move would’ve paired Dragic with the only other Slovenian player in the NBA, reigning Rookie of the Year, Luka Doncic. Dragic has served as a mentor for Doncic and seemed to be a perfect fit next to the young star. The deal appeared to be done until it was suddenly taken off the table. So what happened? 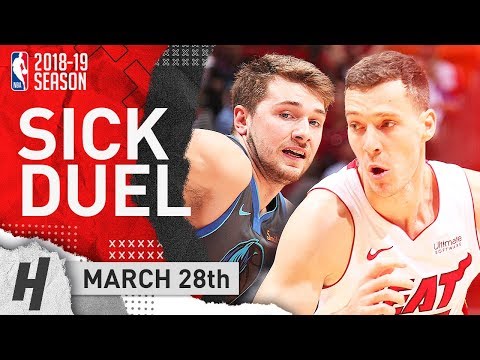 The Mavericks apparently thought they were trading for forwards Derrick Jones Jr. and Kelly Olynyk, not Dragic. “There was absolutely nothing malicious that went on,” Cuban said in a recent email to Barry Jackson of the Miami Herald.

“I was sitting in the room full of people when the call was discussed and we put the trade we thought was happening on our board. We later discussed trade kickers and added a player to make it work. They obviously thought they heard something else.”

The miscommunication narrative is hard to swallow. NBA teams typically have many people within their organizations involved in trade talks. It’s one reason why trade leaks are so difficult to contain.  It seems unlikely that the employees, executives, agents, and billionaire owners on both sides were all set to engage in wildly different trade scenarios.

It’s possible that Cuban didn’t want to help the Heat given the two teams’ history. Miami and Dallas have battled in the NBA Finals twice. Miami beat the Mavericks for the crown in 2006 while Dallas got revenge against the Heat in 2011. In 2011, Heat players mocked the Mavericks beloved star, Dirk Nowitzki. If Cuban purposely led the Heat on, it wouldn’t be the first time the billionaire has held a grudge.

Mark Cuban Tired of Getting Burned

Maybe Mark Cuban just wanted someone else to get spurned for once. The Dallas Mavericks were a victim to one of the more hilarious mishaps in recent NBA history. In 2015, center Deandre Jordan had agreed, in principle, to sign a four-year contract with the Dallas Mavericks. In a battle that played out via emojis on Twitter, players from the Mavericks and Jordan’s previous team, the Los Angeles Clippers, raced to the center’s Houston home to convince him to choose their respective teams.

The showdown ended with Clippers players locking Jordan in his house while ignoring Dallas representatives.

So far, Clippers able to keep everyone else out of house, including Cuban, agents. Everyone. They're in four-corners until midnight Eastern.

Don't agree with the furniture layout but I'm not an interior designer. pic.twitter.com/23PNgQB88z

Jordan ended up resigning with Los Angeles, leaving Mark Cuban and the Mavericks with nothing but an apology. That was not good enough for the disgruntled billionaire.

Not to be outdone, Mark Cuban waited three years before finally acquiring Jordan in 2018. Less than a month into his first season with the team, stories began to leak from the Mavericks’ camp that Jordan was a selfish player. Jordan’s value has declined rapidly since then. It could be the case of a player’s inevitable decline or it could be part of another Mark Cuban revenge story. One thing it does not appear to be is a “miscommunication.”