Walmart (NYSE:WMT) is the largest private-sector employer in the United States. The retailer boasts a staggering 1.5 million employees and claims the top spot on Fortune’s Global 500 list with $514 billion in annual revenue. Needless to say, Walmart is crucial to the U.S. economy.

The president himself highlighted Walmart’s importance back in August after the company reported its second-quarter result.

But Walmart’s fourth-quarter earnings suggest the company isn’t doing as well as expected.

Going by Trump’s logic, this may mean the U.S. economy is weaker than we think. Walmart’s soft fourth-quarter result is in sharp contrast to its soaring stock price. The retailer’s stock is becoming increasingly divergent from business fundamentals.

Retailers depend on the fourth quarter to drive revenue and EPS growth because it encompasses the crucial holiday season. Fourth-quarter weakness can have an outsized impact on full-year results.

The holiday season wasn’t as good as expected due to lower sales volumes and some pressure related to associate scheduling.

Looking forward, investors should expect Walmart to experience top-line pressure from the Chinese coronavirus in the first quarter of fiscal 2021. Management isn’t including these headwinds in their guidance for the year.

It’s too difficult to tell at this early stage exactly how to forecast it. We are still operating our stores [in China]. Almost all of them are open … but operating on reduced hours.

Investors should expect Walmart to revise its 2021 outlook downward, much like Apple did on Monday, because management is failing to account for a massive black swan event in the Chinese economy.

Walmart operates 433 locations in China, and the country is one of the key growth drivers in its international segment. With consumer activity suppressed in many of China’s largest cities, it’s almost impossible for Walmart to escape the crisis unscathed.

Despite the weaker than expected earnings, Walmart is only 5.5% off its all-time high. This trading pattern is symptomatic of a stock market that is becoming divorced from fundamental business performance.

Walmart’s fourth quarter wasn’t a disaster, but its growth is clearly slowing.

The stock market hasn’t reflected Walmart’s fundamentals since the ‘Trump rally’ began after the 2016 elections. The company’s stock price is growing significantly faster than its revenue. 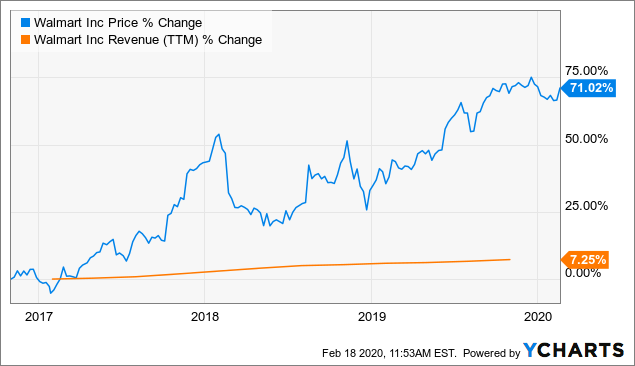 Management is propping up Walmart’s bottom line through massive buybacks. This strategy has become popular due to historically low interest rates.

But what happens when the punch bowl is removed? 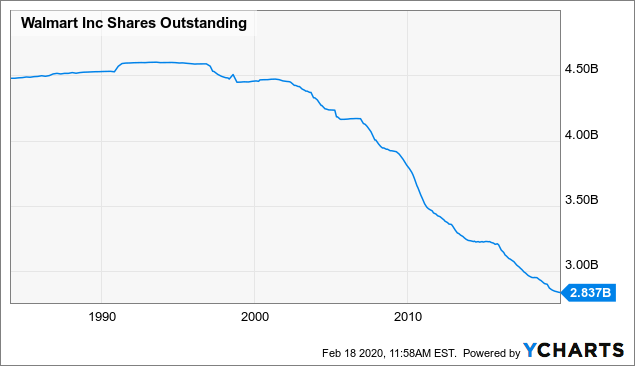 Investors should be worried. Stock performance no longer reflects corporate performance. Instead it reflects buybacks driven by extreme Fed stimulus. The rally may be nearing its end.