Twenty-four games into the season and the Milwaukee Bucks are becoming the team to beat in the East.

While the spotlight has been shining on sexier squads like the Lakers, Clippers, and even the Celtics, Antetokounmpo is quietly leading his merry band of Bucks into the top of the league. Milwaukee, proud owners of the longest winning streak in the NBA, share the number one spot with the L.A. Lakers with 21 wins and three losses.

This season, the Bucks are outclassing their opponents. Statistics reveal their dominance on both ends of the floor.

Milwaukee’s offense is built around Giannis Antetokounmpo. The idea is simple: Surround the MVP with shooters and run the pick and roll.

The offensive setup is no different from the strategy of the Houston Rockets. But the Rockets don’t have an offensive juggernaut like Antetokounmpo. With the spacing provided by the shooters, the Greek Freak can roll and dominate helpless defenders.

It’s no wonder that the league’s MVP is shooting at an excellent 56.4% from the field.

If teams devote additional bodies to try to stop Antetokounmpo, the Greek Freak is a willing passer. In the game against the Magic, three players collapsed on Antetokounmpo. Giannis found open man Khris Middleton who buried the dagger three.

With Giannis at the helm of the offense, the Bucks are hitting on all cylinders. They are number one in points per game at 120.5 with 13 players hitting over 40% from the field.

It gets worse for opposing teams. Antetokounmpo is draining threes on a consistent basis. If defenders sag or leave him open, the MVP has the stroke and the confidence to make them pay. 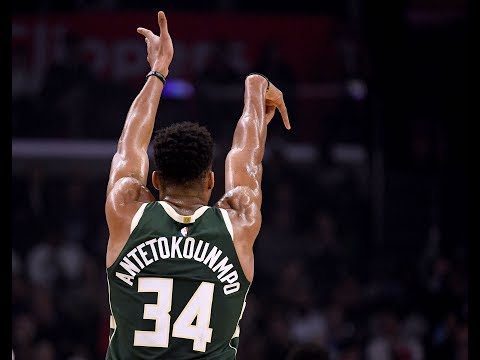 Three-point shooting is the Greek Freak’s most lethal weapon. Giannis is not the only Buck hitting threes with consistency. Fourteen players on the roster are over 40% from beyond the arc. With range from deep, the floor opens up for everyone. If defenders choose to clog the lane, they get hit with a triple.

It’s no wonder that the Bucks are third in the league in three pointers made per game. The team makes 14.2 threes per game. That’s a backbreaking 42 points off of threes.

The best offense is a good defense. No other team in the league except for the Milwaukee Bucks embodies this adage. While they may be number ten in opponent points per game (107.2), they dominate the game by controlling the paint.

The Bucks are number one in limiting opponent points in the paint at 39.8. Milwaukee’s inside defense is anchored by Brook Lopez, who blocks more than two shots per game. With teams struggling to make a basket inside, the Bucks are in a position to grab defensive rebounds and
score in transition.

It’s not surprising that Milwaukee leads the league in defensive rebounds with 41.7 rebounds per game. They are also number two in fast break points per game with 18.6 points. With defenders backpedaling, the Bucks rank fourth in the league in points in the paint.

The growth of Giannis Antetokounmpo has been impressive thus far. He’s now carrying the Bucks on top of his broad shoulders. It’s time for the NBA to fear the deer.