The spooky season is upon us and that means a whole slew of free content updates are coming to some of the hottest games out there. If you’re looking for a Halloween-themed fix in your video games this October, here’s a quick list.

Fortnite’s annual Halloween event, Fortnitemares, is still mostly shrouded in mystery in terms of when it’ll be dropping and what exactly will be going on. Thanks to the tireless work of data miners such as @kleinmike and @hypex we have a pretty decent idea about what sort of content we can look forward to.

Most of the Halloween content revolves around skins. Everything from a glowing pink goo monster, to creepy multi-faced creatures and even a goth version of the standard soldier girl skin. if you’re looking for some creepy dressings for your Fortnite characters you probably won’t have long to wait for it.

EA’s looter shooter Apex Legends will also be joining in the spooky fun with a new limited-time event called Fight or Flight. Throughout the course of the event, players will be able to take part in a brand new game-mode called Shadowfall featuring a nighttime version of the popular Kings Canyon map.

Of course, there will also be a bunch of cosmetic items available to give your characters and weapons a Halloween makeover. These skins feature everything from Dracula costumes for your character to weird sackcloth wrapping for your pistols.

Destiny 2: Festival of the Lost

Each year Bungie goes out of their way to turn Destiny 2 into a Halloween dream. This year’s Festival of the Lost has already kicked off and has turned the game’s main hub area into a 100% spook-fest.

First, the main hub area is filled with light, candles and other creepy decorations. You can now wear masks, collect chocolate coins, and earn candy which can be redeemed on a legendary item of your very own! Even free-to-play ‘New Light’ players can join in on the fun, as long as they’re at power 770 or more.

This year’s festival also sees the return of the Haunted Forest map, tasking players with assailing the creepy confines of the forest as far as they can in 15 minutes. 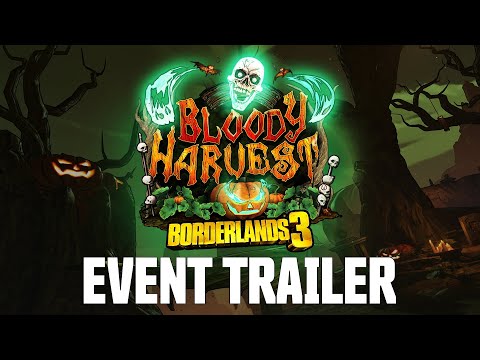 Beginning on October 24th and going on all the way into December, Borderlands 3: Bloody Harvest brings a new horror-themed area to the wacky world of the main game. Once the event beings, you can speak to Maurice to travel to Heck, the new location made exclusively for the event.

Bloody Harvest features a whole suite of brand new cosmetic items, from character and weapon skins to gun trinkets and a new design for your echo device. As if that wasn’t already enough – you can also fight your way through tones of new enemies, face off against a terrifying new boss, and even get your hands on a new legendary weapon: The Fearmonger.

This permanent mission will also reward players (who are brave enough to complete it) with two unique rewards 😱#Halloween pic.twitter.com/S6C6VOVZ1V

While it may not have a snazzy name like the other entries in the list, Hitman 2’s Halloween content might be the scariest. Escalation missions are a mode in which the player completes missions up to 5 times, with each round adding a new objective that must be completed.

The new escalation mission takes place on a pre-existing map that has been given a Halloween coat of paint. Agent 47 must also complete said mission while permanently dressed up as a slasher movie villain. The best part? This particular mission is a permanent addition to the game and therefore won’t go away once the season is over.

There you have it, a selection of some of the best free Halloween content updates in some of the most popular video games going. More than enough to keep you going until the night of fright and beyond.