Elon Musk tweeted Friday that SpaceX’s new reusable Starship will make “life as we know it” multi-planetary. The tweet came mere hours before a much-anticipated presentation in Texas near Boca Chica.

Starship will allow us to inhabit other worlds

On Saturday, Musk will reveal the prototype Starship Mark 1 and detailed updates about SpaceX’s progress. And there’s been a lot of progress. Twelve months ago the Boca Chica complex was little more than a mound of dirt. Today it’s a fully operational launch site.

This week Musk teased a few interesting facts ahead of the presentation. For instance, Starship Mk1 is 165 feet tall and weighs 1,400 tons when fueled up, compared to 200 tons “dry.” Additionally, with a max payload, Starship’s total mass will be 5,000 tons. Mk1 will also have six landing legs. (“Two windward, one under each fin & two leeward.”)

Musk also tweeted a picture of the partially completed prototype:

How is SpaceX paying for it? Starship will eventually take over the Falcon Heavy rocket’s commercial duties. It’ll bring supplies to the International Space Station and take satellites into orbit. That includes the SpaceX Starlink constellation. It will use thousands of satellites to deploy high-speed WiFi from orbit. It could rake in $40 billion a year.

Japanese billionaire Yusaku Maezawa bought SpaceX’s first ticket for a round-the-moon trip aboard Starship. That will help bankroll some of the project. The mission, planned for 2023, is named “Dear Moon.”

For years Musk has raced to create cost-efficient solutions for interplanetary travel. Propagating life beyond this planet is a matter of survival on a long enough timeline. But Musk doesn’t see any reason to wait around.

“I think we need to become a multi-planet species, and we were clearly not getting there based on the progress in the space industry. So I started SpaceX to try to solve that problem.”

“History is going to bifurcate along two directions. One path is we stay on Earth forever, and then there will be some eventual extinction event….The alternative is to become a space-faring civilization and a multi-planet species, which I hope you agree that is the right way to go.”

In his face-to-face panel with Alibaba founder Jack Ma last month, Elon Musk urged viewers not to take it for granted that consciousness will continue. He reckoned devoting 1% of humanity’s resources to making life multi-planetary “seems like a wise investment for the future.” 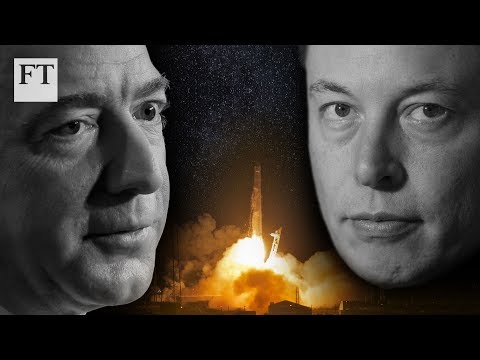 Elon Musk isn’t the only billionaire founder with interest in perpetuating the species through space travel. Richard Branson’s Virgin Galactic isn’t aiming as far as Mars. But it’s still raising capital and doing the engineering work to improve and cut costs on sub-orbital space travel with reusable ships.

Its SpaceShipTwo vehicle made marked progress in construction. And Virgin Galactic announced plans for an IPO earlier this year.