At last, investors can soon buy shares in a space-travel company. Richard Branson is the first-mover. The billionaire is opening up Virgin Galactic to outside investment in an upcoming IPO. The deal is expected to happen before year-end, keeping the IPO ball rolling in 2019.

It is a boon for all of private-sector space travel – not only Richard Branson’s company – as it thrusts other players including SpaceX and Blue Origin further into the spotlight. It might similarly set off a wave of IPOs in the space-travel industry, though Elon Musk probably has reservations about bringing a second company to market where he would be under greater scrutiny by the U.S. SEC.

Branson, who is not the least bit afraid to share the spotlight, told CNBC:

“It’s a very, very, very exciting time for space with Virgin Galactic, with what Elon’s doing, what Jeff Bezos is doing, with what Boeing are doing. And the investment community is beginning to take a lot of interest in it….We believe it will be one of the big new industries of the future.”

Having demonstrated the repeatability our full flight profile with two crewed spaceflights, we had an opportunity to rethink our investment plans. @virgingalactic is now on track to become the first ever publicly listed human spaceflight company https://t.co/mk5dCNKulq pic.twitter.com/R1Ib7i2tL9

Elon Musk and Jeff Bezos have both brought companies public before – Tesla and Amazon. It’s within the realm of possibility that they would do it again. Now that Branson is doing it, he’s going to up the ante and we’re going to begin seeing more Wall Street reports on space tourism.

Elon Musk is similarly exploring sending people to space on his Crew Dragon spaceship, and if Branson’s company is indicative of the type of demand for space travel, sales could come pouring in. Branson believes his company has a leg-up on the competition because his spaceships resemble airplanes more than rockets and they have a first-mover advantage. Musk’s SpaceX, however, is worth a cool $30 billion, Branson notes on CNBC.

Musk’s space efforts have been focused on the commercial side of thing but he would like to expand into space tourism, as well, having reportedly said:

“And I think it’d be pretty cool if people went to space station on an American vehicle as well. I think that’s something that we’ll do, and NASA’s very supportive of that.”

Space travel may be a futuristic concept but it is a lot closer than you might think. Virgin Galactic has a pipeline of “more than 600 people” and has attracted some $80 million in deposits to its coffers from global customers even before opening space travel to the public (though they have sent five people so far.) Virgin Galactic plans to launch commercial operations within 12 months. 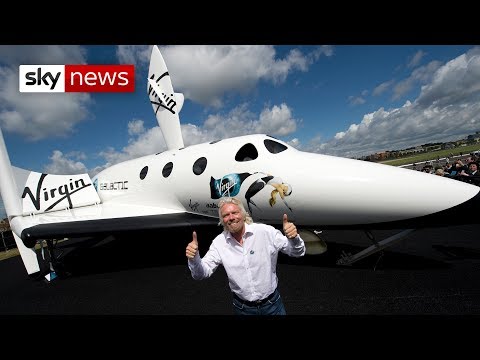 With the capital he raises from the IPO, Branson wants to build more spaceships, which will make the whole concept of space tourism more affordable for the average Joe.

If Virgin Galactic’s Indiana Jones-like business model sounds at all familiar, you might be thinking of Tesla, which is known for selling electric vehicles based on the lofty promises of the company’s CEO Elon Musk. Of course, Musk has also been sending satellites into space, as is Amazon’s Jeff Bezos.

Venture capitalist Chamath Palihapitiya, who is at the helm of Social Capital, stepped in to provide much of the funding that Virgin Galactic needs. Palihapitiya is pouring $700 million via his SPAC and $100 million of personal capital into Richard Branson’s space company. The rest will be raised in the capital markets. Palihapitiya told CNBC it’s about “capitalizing something that will put people into space.” Not only is Palihapitiya an investor but he’s also bought his ticket to space.