The U.S. stock market keeps pushing higher, but ‘smart money’ investors are sitting this rally out. The Dow Jones Industrial Average (DJIA) soared on Wednesday as investors cheered Gilead Sciences’ claim that its remdesivir drug is an effective treatment for coronavirus after all.

But the world’s richest investors aren’t taking the bait as stocks rally further off their March lows. A majority of high-net-worth investors are waiting for this rally to cool off before dipping a toe back into the market. According to a new UBS Global Wealth survey:

The survey polled more than 4,000 investors and business owners with at least $1 million in investible assets.

It’s a strong signal that the ‘smart money’ sees a long and difficult return to normal for the economy.

The Dow Jones Industrial Average (DJIA) surged at the opening bell, responding to Gilead Sciences’ claim that remdesivir had “met its primary endpoint” in a government study analyzing the drug’s effectiveness as a treatment for COVID-19.

Investors reveled in the news out of Gilead Sciences, which came just a week after leaked World Health Organization (WHO) documents suggested that remdesivir had “flopped” in a Chinese trial.

The stock market was further buoyed by an optimistic earnings report from Google’s parent company Alphabet and hopes for a dovish statement from the Federal Reserve later today.

Waiting for the bear market rally to end?

The bounce back up from March lows has many analysts screaming ‘bear market rally.’ In other words, a short-term bump before the market resumes its downward slide. Steven Glass of Pengana International Fund is firmly in this camp, citing an earnings apocalypse and a lack of corporate buybacks to support the market.

We do think this is probably a bear market rally.

Even CNBC’s stock market cheerleader Jim Cramer, thinks the market might be getting ahead of itself.

You’ve got a lot of hope driving this market.

There are concerns that the stock market is detached from the true economic reality. Indeed, GDP is expected to contract 30% next quarter. And while states are re-opening, there’s no guarantee that consumer confidence comes back.

Investors lie in wait to buy the next crash

It seems wealthy investors agree with the ‘bear market rally’ narrative. Cash positioning among this group is at the highest level since 9/11. In other words, investors are sitting on the sidelines waiting for a better entry point.

Close to $4.7 trillion is now parked in money market funds, outstripping 2009 levels. There are other signs of caution in the market, too. Long-term equity futures are uncharacteristically short-biased. And hedge funds have dialled down their leverage significantly.

It’s not all bad though. This enormous cash buffer sitting on the sidelines means smart investors are ready to pounce. And that should limit the downside if there is another fall.

Is the Dow Jones in denial?

Investors are shrugging off wave after wave of disastrous earnings and economic data. So, is the stock market in denial as it pushes higher? Morgan Stanley’s chief investment officer Mike Wilson doesn’t think so.

Our view on the market overall is we’re bullish. We just think there’s more upside in potentially some of the laggard areas. 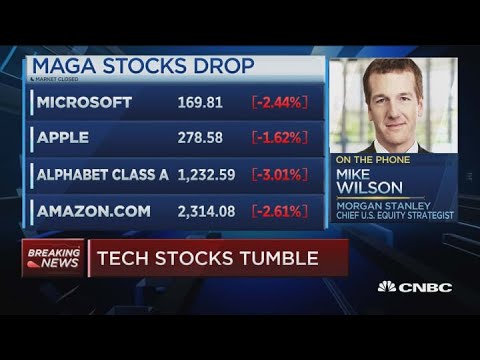 He believes the market has already absorbed every possible negative shock. The stock market is looking a year ahead, he says, currently pricing in a 2021 recovery.

The Dow Jones almost always bottoms out well before the fundamentals. With economic readings at record lows, this means the stock may have already ploughed the bottom.

What to watch on the stock market today