The Dow rallied for a second straight day on Tuesday because Wall Street has renewed confidence that President Trump desires to strike a trade deal with China.

Even if he’s fudging the facts about the true state of US-China relations.

Dow Strings Together Another Triple-Digit Rally

All of Wall Street’s major indices secured moderate opening bell advances, placing the US stock market on track to take another bite out of its August 23 plunge.

Stocks added to their previous-day rally amid widespread optimism that recent market sell-offs will encourage President Trump to abandon his hostile trade war posture – and his Dow-crippling retaliatory tariffs.

Trump sparked Monday’s rally with his claim that US negotiators had spoken to top Chinese negotiators over the weekend about resuming discussions in the near future.

China’s foreign ministry has all but denied that phone call took place, but the stock market doesn’t seem to care.

What Wall Street believes is truly important is that Trump wants the market to think a call actually happened, which suggests that Friday’s Dow Jones rout spooked the president into softening his stance on China.

In a weird way, that could even be interpreted as being more bullish for the stock market than if US officials had spoken to Beijing.

That optimistic outlook will face a crucial test this week.

If Trump has genuinely softened on China, the conditions are ripe for another tariff truce, which could set the stage for a return to the negotiating table. 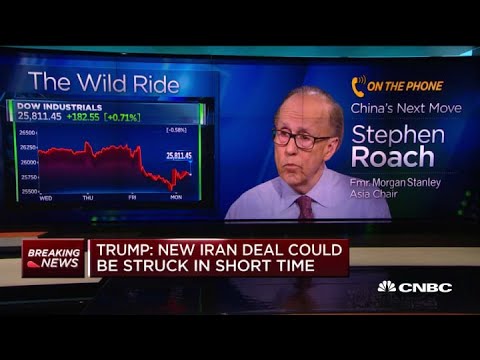 However, if those tariffs kick in as scheduled, it could signal that even the so-called “Trump Put” has a limit.

Perhaps that’s one reason why Nomura analyst Masanari Takada predicts that the stock market will suffer a titanic sell-off as soon as next week, which he says would herald a “Lehman-like” crash.

“The U.S. stock market especially is facing its greatest test of the year thus far,” Takada said in a note to clients on Monday, according to CNBC, predicting that the market will soon experience “panic-selling by fundamentals-oriented investors and systematic selling by trend-following technical investors along the way.”