The Dow added to Tuesday’s blockbuster rally, and the S&P 500 cleared a key technical hurdle in what is shaping up to be another strong day for the US stock market. The bitcoin price, meanwhile, entered the day with a minor decline but held firmly above its interim support level.

As of 8:54 am ET, Dow Jones Industrial Average futures had climbed 73 points or 0.29 percent, implying an opening bell rise of 77 points. S&P 500 futures rose 0.25 percent, and Nasdaq futures climbed 0.42 percent to round out another positive pre-bell session for the US stock market.

On Tuesday, the Dow opened to major gains and raced higher throughout the trading session, ultimately closing with a mammoth increase of more than 372 points or 1.49 percent. The S&P 500 and Nasdaq were close behind, gaining 1.29 percent and 1.46 percent, respectively.

The S&P 500 may have seen the smallest gains of Wall Street’s three major indices, but its Tuesday advance was also the most significant. That’s because the broad consumer index closed above its 200-day moving average — a key technical indicator — for the first time since Dec. 3.

At 2,744, the S&P 500 currently sits one point above the 200-DMA, and some stock market analysts believe the push through that resistance level will spur the stock market’s recovery even further.

“It should open the door to 2,800 now…It does feel like the advance/decline line is really strong. The broad-based rally is strong. We have two days of overseas markets rallying. It doesn’t seem as if it’s a fake out for now…The active bulls keep stepping up where they have to,” said Scott Redler, partner with T3Live.com, in remarks cited in CNBC.

Fundstrat Global co-founder Tom Lee echoed that sentiment before Tuesday’s close, stating that the 200-DMA was as “battle line” for the S&P 500 and that a close above that mark “would be another sign that 2019 [is] shaping up to be a resumption of the bull market.”

Obviously the market close is important but closing above the 200d would be another sign that 2019 shaping up to be a resumption of the bull market.

…a year one needs to buy the dip

As for fundamental factors, most analysts attributed the stock market’s mid-week rally to – what else? – US President Donald Trump and the White House.

Earlier this week, Trump implied that he would likely sign a bipartisan compromise bill that would fund the federal government and avoid another shutdown – even though he was not happy that the agreement failed to give him the full $5.7 billion in border wall funding he had demanded.

….Will be getting almost $23 BILLION for Border Security. Regardless of Wall money, it is being built as we speak!

US-China Trade War Escalation Could be Put on Hold

Further bolstering the stock market’s bull case, Trump hinted that he might postpone the imposition of new tariffs on Chinese goods beyond the heretofore hard deadline of the beginning of March. 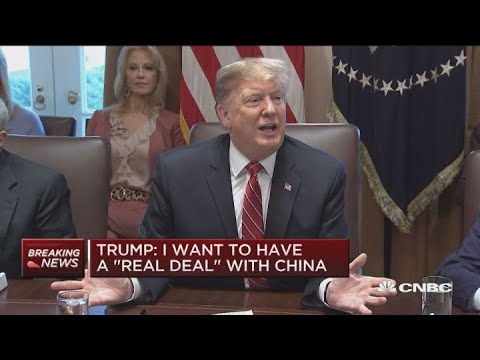 As CCN.com reported, there appears to be virtually no chance that the US and China will strike a new trade deal before that deadline, so postponing the new tariffs should provide the stock market with some short-term stability while negotiators in Washington and Beijing work out plans for a meeting between the leaders of the world’s two largest economies.

The cryptocurrency market was noticeably more quiet, with most top crypto assets making little movement from their previous-day levels.

As of the time of writing, the bitcoin price continues to trade around $3,580, roughly $30 above its interim support level at $3,550. A break below that level would confirm that the crypto market is still in bear territory.

Writing in a note to clients on Tuesday, crypto broker BitOoda said that the firm remains bearish on bitcoin’s short-term prospects and expects the flagship cryptocurrency to fall into the low $2,000s before the selling is over. Notably, BitOoda also expects traders to rotate out of bitcoin and into other cryptocurrencies as the market slouches lower.

“What we believe will happen while remaining in this BEAR market is that traders and investors will NOT increase their portfolio allocation or deploy more FIAT into digital assets. However, they will rotate their holdings away from BTC and into Alt coins, therefore chipping away at the BTC’s market cap and Dominance within the sector.”

Right now, bitcoin’s market share stands at 52.6 percent, with the flagship cryptocurrency’s circulating valuation eclipsing those of the more than 2,000 altcoins that have sought to displace it as the world’s leading crypto token.

September 25, 2020 1 Comment
← PreviousBitcoin Traders Turn to Derivatives in Droves: The Ultimate Sign of Crypto Winter?
Next →Dow Triumphs But a Skeptical Harvard Professor Warns of a Market Collapse