Derrick Rose isolated at the top of the floor on Monday night against Jrue Holiday, one of the league’s best defenders. As the game clock ticked below five seconds, the Detroit Pistons guard finally made his move.

Rose quickly put the ball between his legs, then once with more force the other direction, and dribbled hard toward the rim with his left hand. With Holiday’s momentum carrying him backward, Rose quickly spun back to his left, creating ample space for a fadeaway jumper. 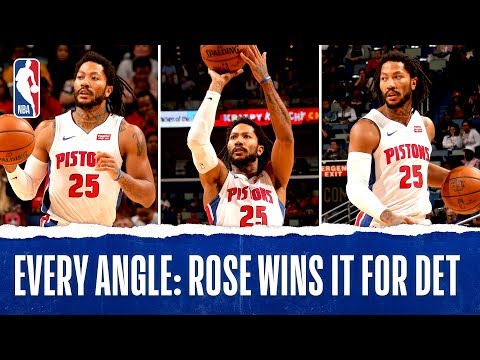 The Pistons beat the New Orleans Pelicans 105-103 on Rose’s buzzer-beating game-winner, prompting the 11-year veteran to remind the basketball world what once seemed so obvious.

‘Born to Do This’…Until He Wasn’t

Just short of a decade ago, the notion that Rose’s basketball bona fides would ever be doubted seemed outlandish.

He became the youngest MVP in NBA history in 2011, winning the award at 23 after leading the 62-20 Chicago Bulls to the league’s best record during the regular season.

But a subsequent string of injuries derailed Rose’s path up the league’s individual hierarchy.

The player who once seemed destined to challenge LeBron James as the singular star of this generation was instead almost out of the NBA altogether two years ago, when his ill-fated stint with James and the Cleveland Cavaliers came to an end at the 2018 trade deadline. Rose went unsigned for a full calendar month before the Minnesota Timberwolves finally ended his hiatus.

Team-wide dysfunction during the final months of Tom Thibodeau’s tenure in Minnesota, unfortunately, made it easy to overlook Rose’s performance last season. But the indicators of a career reborn were there if you were looking, including an emotional 50-point outburst against the Utah Jazz that included a game-saving block. 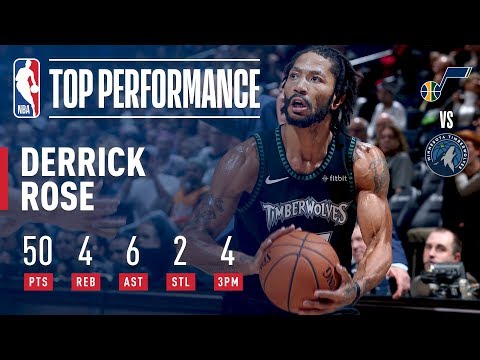 Derrick Rose Is Thriving in Detroit

Still, there’s a reason why Rose had to settle for a relatively meager two-year, $15 million contract from the Pistons in July. He missed 26 of Minnesota’s last 46 games with nagging injuries, lending credence to the notion he might always be an injury liability.

Rose hasn’t disproven that assumption nearly two months into his debut with Detroit. A strained right hamstring sidelined him for four straight games in November, and nagging pain in his left foot has ensured the Pistons monitor his minutes for back-to-backs and other onerous sections of the schedule.

Regardless, it’s safe to say Detroit is thrilled with Rose’s impact in the season’s early going. He’s averaging 16.1 points and 5.8 assists in just 23.7 minutes per game off the bench, and has improved his efficiency – long an issue for Rose even during his early-career heyday – to just above league average. Rose is getting to the paint with renewed vigor and ferocity, driving to the rim 15.8 times per game and shooting 54.3% on those attacks, both elite-level marks.

More indicative of his sweepingly positive impact? Rose’s net on-off offensive rating is +9.7, an easy team-high. There’s an argument to be made that he’s been Detroit’s best offensive player so far, and coach Dwane Casey wouldn’t necessarily disagree.

“I think Derrick Rose is an engine,” Casey said on Dec. 1, per NBA.com. “I’m glad he’s on our team. His spirit, his heart is in the right place and it’s contagious.”

A former MVP later contending for Sixth Man of the Year would normally serve as evidence of that player’s age or diminishing abilities. Rose, though, is a special case of trials and tribulations.

Rose has fully embraced his new role as bench superstar, and it’s clearly paying dividends for both he and the Pistons. Whether he’s rewarded with postseason hardware or not, Rose’s inclusion with the likes of Lou Williams, Montrezl Harrell, and Spencer Dinwiddie in the Sixth Man race is cause for celebration all by itself – just like his mid-career renaissance at large.