The point of the Dow Jones Industrial Average is to be the “pulse of the stock market.”  It’s a bellwether for general market conditions in the U.S. economy. Having Boeing on the index doesn’t help it achieve this goal.

In fact, it undermines the Dow’s purpose. The entire world is facing many complex crises at once, but Boeing’s crisis is uniquely severe.

It’s among the most vulnerable businesses to the coronavirus pandemic, on top of its never-ending 737 MAX quagmire.

Because the Dow is weighted by stock price, not market cap, BA shares have amplified signal strength in the benchmark. Sudden movements in the average often tell us more about Boeing’s turmoil than the economy.

The Boeing Company is so severely-stuck in a nexus of misfortune, weakness, and threats that its stock is not a reliable indicator of the overall U.S. economy. These formidable obstacles to profitability plague Boeing at a global macro, industry, and individual corporate level.

CNBC’s Phil LeBeau joins “Squawk Box” with the details about the probe in the 787 Dreamliner. Watch: 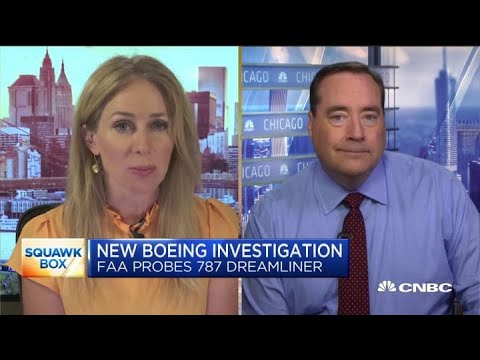 Boeing’s individual corporate business problems range from costly setbacks to utterly devastating human catastrophes in a year of two fatal 737 MAX crashes. And they spring from a ghastly record of failure in corporate leadership, and a corrupt company culture at Boeing.

That’s fed weary investors an endless stream of tragedies, scandals, and missteps for over a year with no respite. The airplane maker’s woes have grown so relentlessly that CNBC’s Jim Cramer called Boeing “cursed” in June when it slashed fuselage orders to 37 from 125. It originally wanted 216.

Now the company has revealed a third quality-control failure in its 787 Dreamliner manufacturing. The rear, wing-like structure on the plane’s tail may age prematurely due to gaps.

Eight of the planes are grounded, and the FAA is conducting an investigation.

That’s a costly error because Boeing has leaned heavily on the 787 since the MAX grounding in March 2019. The manufacturing defect could affect as many as 89% of about 1,000 Dreamliners made so far. They’ll require inspections and possibly structural repairs.

As The Wall Street Journal reports:

The production issues taken together have slowed 787 deliveries. Boeing delivered four in August as a monthly production rate of 10 continues to outpace handovers to customers. Boeing said Tuesday it expects the quality issues to affect deliveries ‘in the near term.’

Boeing is only producing ten of these airliners a month, and still can’t get them all delivered because of this latest snafu.

Airbus, Boeing’s biggest competitor, delivered 39 planes last month. Its stock is down Wednesday along with its August deliveries but it’s still far ahead of Boeing, so it’s not just the airplane industry. It’s Boeing specifically.

Watch Jim Cramer explain why PayPal was one of his top three stock picks for Q2, along with Zoom and Apple: 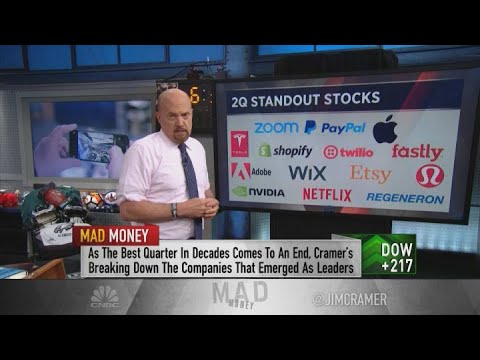 Basically Apple — by itself — took the technology [weighting] within the Dow down from 27.6% to 20.3% [with the 4-for-1 stock split]. It’s a significant decline. By adding Salesforce, you can come back to 23.1% of the Dow being in technology.

But after the coronavirus pandemic, we’ve seen just how valuable technology companies are, and how centrally important they are in the modern economy. Blue-chip tech stocks have shown they can boost returns in good times and absolutely hammer home surging growth during bad times.

PayPal Holdings would give the Dow additional tech exposure while taking more of the economy’s pulse through personal and commercial financial settlement volume. How many dollars are flying around the world is a better, wetter thumb to the wind than how many planes are.