It took just 10 minutes for the elephant in the room to be addressed at the Conor McGregor vs. Donald Cerrone press conference on Wednesday, and boy did the UFC 246 hype event get ugly fast.

The MMA world was focused on the presser to promote Saturday’s bout between UFC superstar Conor McGregor and Donald “Cowboy” Cerrone. This event heralds the return of former two-weight champion McGregor. 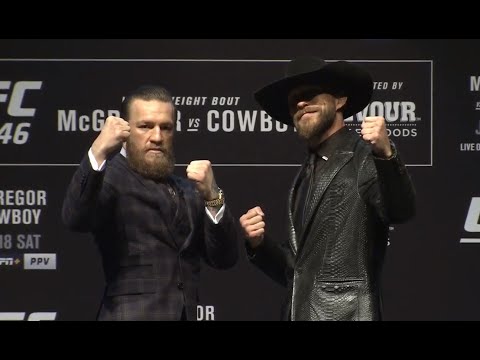 What began as potentially the biggest love-in we’ll see in sports this year quickly turned hostile. The mood changed when Canadian journalist Morgan Campbell had the chance to question the fighters.

Obviously, Campbell hadn’t been clued in on how this was supposed to go.

Early questions from the usual media suspects who attend these events were fairly predictable. They focused on how McGregor was exuding different energy from his last UFC outing and how his fight camp had gone. There was a brief mention of “legal issues” – but the matter was raised almost apologetically.

So far, so good for the UFC and McGregor.

Then up stepped Campbell, who decided to do what any journalist worth their salt would do: Ask the real questions.

Can you tell us anything specifically about the status of the sexual assault allegations in Ireland?

Yeah, he went there. (The New York Times reported in March 2019 that Conor McGregor was under investigation in his native Ireland for sexual assault accusations.)

Within seconds, it was clear exactly how the MMA fans in attendance felt. Both UFC President Dana White and UFC welterweight fighter Donald “Cowboy” Cerrone made their feelings clear too.

No sooner had Campbell dared go where no journalist before him had ventured then we were treated to a cacophony of boos from the fans.

“We’re here to talk about a fight, nothing he does outside of fighting,” adding, “Why does everyone keep going there?”

Why does everyone keep going there?

Considering the severity of the accusations, you’d hope that the answer to such a question would be a no-brainer.

I question how these (mostly male) individuals who seem hellbent on trivializing the accusations McGregor faces would feel if it were their sister or daughter? What if it was someone they knew who had to report such a harrowing experience to the authorities?

It says much about the attendees, as well as the “journalists” who cover the sport (again, mostly male), that one solitary figure was brave enough to challenge the UFC’s toxic masculinity and ask the question that should have been at the forefront of everyone’s minds.

Toxic Masculinity in a Male-Dominated Sport 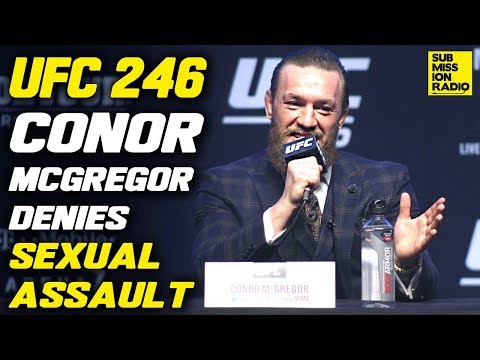 Before Morgan Campbell took the microphone, the press conference consisted of a weird mish-mash of McGregor and Cerrone glad-handing each other for being “proper” fighters. All the while, members of the MMA media acted as little more than cheerleaders on the sidelines.

McGregor didn’t answer the question, which is unsurprising given that it’s an ongoing legal matter. But that doesn’t mean the sexual assault allegations shouldn’t be raised.

We charge journalists with demanding answers to the tough questions. No amount of toxic masculinity should deter them from that mission.

As a long-time MMA fan, I’d love to be able to say that I was shocked at the response Campbell got.

If anything surprised me, it was that the question was even asked in the first place.