The New York Times has now officially transformed into the National Enquirer 2.0. The so-called newspaper’s story regarding another unverified, uncorroborated, unbelievable sexual assault allegation against Supreme Court Justice Brett Kavanaugh is an affront to journalism.

The article was nothing short of an outright smear and hatchet job against the Supreme Court justice. The allegation comes from a Clinton-connected man who claims he saw a man pull out Brett Kavanaugh’s penis and then thrust it into the hand of a woman at a party countless years ago.

Buried around the 12th paragraph in the story is the astonishing claim that the alleged victim of this assault has no memory of it ever happening.

Even CNN attacked the Times for the story. When you’ve lost CNN….

The New York Times had already discredited itself as being an actual news reporting service years ago. It is nothing more than the propaganda arm of the Democratic party.

Yet anyone who still is foolish enough to believe that Brett Kavanaugh did anything that he was accused of last year has to look at this article and be convinced of The New York Times’ political agenda.

As it is, none of the allegations regarding Kavanaugh were ever corroborated. Despite multiple FBI investigations, and witnesses being subpoenaed before Congress, there was not a shred of evidence that Justice Kavanaugh engaged in any of this behavior.

Also notable is the fact that the original accuser, Dr. Christine Blasey Ford, utterly vanished from the public eye the moment that Kavanaugh was confirmed. She hasn’t been heard from since.

How and why could The New York Times be so reckless and so transparently fraudulent in propagating this non-story?

Why is The New York Times trying to re-litigate this entire affair? 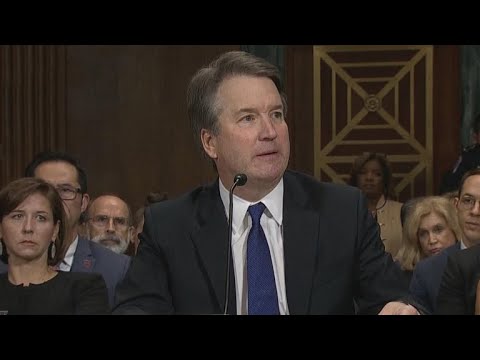 The Real Reasons for the Smear

There are two reasons behind the newspaper’s dishonest and arguably libelous story.

The first is that there is growing concern that far-left Justice Ruth Bader Ginsburg is going to die in the near future. She has been battling various forms of cancer for many years and is old and frail.

The Democrats are concerned that, should she die or retire prior to next year’s election, Mitch McConnell will certainly allow the Senate to hold confirmation hearings on whoever President Trump should nominate.

That nominee is most likely to be Amy Coney Barrett, a woman of unassailable integrity, who is an originalist in her jurisprudence and would certainly be confirmed by the Republican majority. That would tilt the court 6-3 to the right (although given the behavior of Chief Justice John Roberts, the split is more like 5-4).

The New York Times is hoping this might somehow spur current action against Kavanaugh.

There is a second, more insidious, reason for The New York Times to pull this stunt.

They know it is an opportunity for the Democratic candidates to demand Brett Kavanaugh’s impeachment. That way, should they win the presidency next year and manage to take over both houses of Congress, they will try to impeach Justice Kavanaugh in order to replace him with a left-leaning justice.

This should come as a surprise to no one. The Democrats hate the fact that they lost the 2016 election. They have been trying to overturn the results ever since, with a variety of ridiculous plans that included trying to create faithless electors in the electoral college.

They are so upset at the fact that Trump has been able to swing the court to the right that, instead of playing by the rules, they try to reverse what history has already put into place.

Take a look at how the Democratic candidates responded to this story from The New York Times.

I sat through those hearings. Brett Kavanaugh lied to the U.S. Senate and most importantly to the American people. He was put on the Court through a sham process and his place on the Court is an insult to the pursuit of truth and justice.

He must be impeached.

Let’s remember that Kamala Harris is the former Attorney General of California. She is a former prosecutor. A prosecutor would never file and pursue a case unless there was compelling evidence. There has never been compelling evidence of any kind regarding any allegation against Justice Brett Kavanaugh.

That should also tell you something about the character of Kamala Harris. This former prosecutor does not believe in the rule of law. As far as she is concerned, a ridiculous story in a major newspaper that serves as a propaganda arm for the Democrats is somehow grounds for impeachment.

As for the “sham process,” if she or anyone else had evidence – or at least corroboration – then where was it?

There is nothing to impeach Kavanaugh for, and the only reason Kamala Harris is tweeting out this nonsense is to gain favor with her base.

The same goes for Elizabeth Warren.

Last year the Kavanaugh nomination was rammed through the Senate without a thorough examination of the allegations against him. Confirmation is not exoneration, and these newest revelations are disturbing. Like the man who appointed him, Kavanaugh should be impeached.

Apparently Elizabeth Warren forgot about the multiple FBI investigations into the allegations, including an additional unnecessary one that extended the hearings for week, that still showed no evidence that he had done anything.

The Senate did, in fact, conduct a thorough examination of the allegations against Brett Kavanaugh.

Warren should be ashamed by saying “confirmation is not exoneration.”

The only crime being committed right now is being perpetrated on the American people by The New York Times and the shameless Democratic presidential candidates. This, by the way, comes despite the fact that Brett Kavanaugh has actually sided with liberals in the court on numerous occasions.

It’s All About Abortion

At the center of all of the Supreme Court wrangling, of course, is the issue of abortion. That’s all the left cares about. They continue to smear and destroy the character of an upstanding and decorated jurist because they think it’s more important to kill babies.

Yet the shortsightedness and zeal of abortion advocates shows that they will stop at nothing to destroy anyone who challenges their worldview.

This comes despite the fact that the Supreme Court is never going to overturn Roe v. Wade. The Supreme Court rarely reverses itself. It has only done so a handful of times in the modern era and almost always on specific interpretations regarding the Constitution or its amendments.

It also assumes that a case in which Roe v. Wade could be directly challenged would ever reach the Supreme Court.

It also ignores the fact that, even when the court has leaned to the right in the past, no challenge to Roe v. Wade ever made it to the Supreme Court.

So this is all truly much ado about nothing.

It should prove beyond the shadow of a doubt that The New York Times, and much of the media, has no interest in doing actual reporting.

They merely provide agitprop for the left.